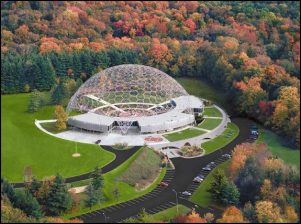 They look weird, but cool. Even film-makers are inspired by them: in the famous James Bond movie You only live twice the world leaders gather in a building that has a geodesic dome shape. But what are they like? According to mathematicians, the geodesic dome is a triangulation of a polyhedron to form a close approximation to a sphere or hemisphere. Geodesic domes can be found in nature, for example in crystal structures and viruses. The herpes virus, for instance, has the nice shape of a regular icosahedron (a 20-sided polyhedron).

The first time geodesic domes turned up in architecture was in 1922, when the chief engineer of the Carl Zeiss Company designed a dome as a projection surface for the planetarium projector. 20 years later the idea of using geodesic domes to tackle the post-war housing crisis occurred to Buckminster Fuller, a mathematician, philosopher, engineer and poet. He believed that natural structures are better than conventional constructions, because they are more adaptable to climatic and other challenges. He was right that these domes are energy efficient buildings, which provide the largest living area with the least surface and need less material to build them. Surprisingly, these structures are five times stronger than a rectangular-shaped house. For this reason, they are disaster-proof, because the triangle is the strongest shape, so a geodesic house can even survive earthquakes and tornadoes.

Are there any cons? There are some: like the higher construction costs, due to their irregular shape, or the moisture condensation, which is quite common, or the lack of privacy, because it is difficult to create rooms and divisions within such buildings. But in spite of these (eradicable) disadvantages, geodesic domes are becoming popular around the world.