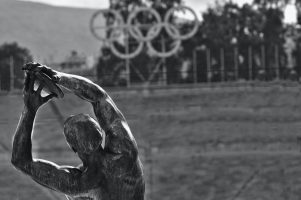 With the 2020 Olympic Games being cancelled we may seize the opportunity to reconnect with the spirit of this most famous and prestigious sporting event. For it has not always existed in the format we know it today, the ancient Olympics serving a vastly different purpose than the modern day Olympic Games.

Just how far back they date is a matter of debate but most sources agree that the first Olympics of the ancient world took place in 776 BCE, while others argue they date back much further. One founding myth tells us that Heracles himself held the first Olympics in honour of his father Zeus after defeating King Augeas whose stables he cleaned in his 5th labour but did not receive the agreed reward.

In the beginning the Olympics were as much a religious festival as an athletic event. The athletes would put their skill on display to follow in the footsteps of Heracles. Excelling in a religious festival was of great importance and seen as an honour for the whole state to the extent that during the Olympics rival cities would declare a truce so that their athletes could compete.

The word “athlete” takes on a wider meaning as Greek gymnasiums did not offer only physical exercise but also held lectures on philosophy, literature, music and medicine. They were an important part of spiritual and social life in Greece and supplied the training for the city’s nest athletes. A healthy mind in a healthy body, as well as a well formed soul in a well formed body. The education of the youths was almost solely taking place in the gymnasiums of Greece to bring out upright, healthy citizens with strong morals and ethics. This made the Olympics one of the most important Festivals of ancient Greece, so much so that the first calendars are in the 4 year interval in which the games would take place. These intervals were called Olympiads.

In the first Olympics the only discipline that resembled a sporting event was a footrace over 176m, a distance allegedly set by Heracles which was called a “stade”, from which the word “Stadium” is derived.

Further to the footrace the festival also consisted of artistic disciplines such as sculpting, singing and poetry to bring out the more internal traits of the “athlete” participating. In the succeeding Olympics other disciplines were added such as wrestling, boxing, javelin throwing and others.

As fiercely fought as the competitions between athletes from rival states were, mutual respect was held in high regard. A defeat in any discipline was not seen as a personal failure but as a recognition that the opponent had a higher mastery of whichever discipline they were engaged in. The moral character and discipline to overcome your own challenges was instilled in the gymnasiums from a very young age. And so was the ability to accept the defeat and recognise the opponents skill. This is what differentiates victory from simply being successful.

One can be victorious even in defeat. Being victorious is therefore also our ability to pick ourselves back up after we have been defeated in whatever challenge we chose or life has brought us. It is only when we put ourselves to the test that we learn how to wrestle with our weaknesses.

Competition fostering excellence was the understanding of the time and this spirit would later be revived in the founding principal of the modern Olympic games: “The importance in the Olympic Games is not to win, but to take part; the important thing in Life is not to triumph, but the struggle, the essential thing is not to have conquered but to have fought well.” This quote is from Pierre de Coubertin, founder of the International Olympic Committee (I.O.C.). It reflects perfectly the noble spirit of competition the Olympic games can inspire, the difference between victory and success.