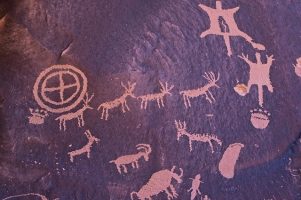 Art forms are a sign of the emergence of symbolic thinking and, in this way, art represents a fundamental threshold in the evolution of humankind. It is what makes us human.

Scientists have found evidence of cave paintings, sculpted figures, decorated bone tools and jewellery. Paintings in caves like Chauvet, Altamira and Lascaux go back to the Upper Palaeolithic period between 40,000 and 10,000 years ago. Researchers have concluded that these artefacts must have been created by modern humans (Homo Sapiens) who were spreading all over Europe after their arrival from Africa.

In 2018 there was a claim of the oldest human-made cave painting discovered in Blombos cave in South Africa. The art work is dated to 73,000 years ago, significantly older than any other previous findings. Meanwhile an international team of researchers from the Max Planck Institute for Evolutionary Anthropology in Leipzig, Germany, in cooperation with Southampton University in the UK, has been examining some of the cave art in Spain using uranium-thorium dating. They have confirmed that the art works in the caves they were studying are actually older than we had believed so far.

“Our dating results show that the cave art at these three sites in Spain is much older than previously thought”, says team member Alistair Pike from the University of Southampton. “With an age in excess of 64,000 years it predates the earliest traces of modern humans in Europe by more than 20,000 years. The cave art must thus have been created by Neanderthals.”

“According to our new data Neanderthals and modern humans shared symbolic thinking and must have been cognitively indistinguishable”, concludes João Zilhão from the Catalan Institution for Research and Advanced Studies in Barcelona. “On our search for the origins of language and advanced human cognition we must therefore look much farther back in time, more than half a million years ago, to the common ancestor of Neanderthals and modern humans.”

Interestingly, in 2014 the scientific journal Nature published a paper reporting on fossil freshwater shell findings from Java, Indonesia. In the collection they found evidence for freshwater shellfish consumption by hominins, one unambiguous shell tool, and a shell with a geometric engraving. Data indicate that the engraving was made by Homo erectus, and that it is considerably older than the oldest geometric engravings found so far. Now we are looking back half a million years. They don’t know what the purpose of the engraving was, but the evidence of a geometric art representation is there. Homo erectus (meaning ‘upright man’) is a species of archaic human, with the earliest fossil evidence dating to 1.8 million years ago. Homo erectus is the immediate predecessor of Neanderthal man.

So now we are looking deep into the past, but we don’t see the real depth yet. There is not enough physical evidence. But what we do know is that the emergence of art and religion is fundamental for the development of humankind. Cave art is generally considered to have a symbolic and religious function. Some experts think that cave art may have been used alongside the shamanic practices of entering a trance state and sending the soul of the shaman into the otherworld to make contact with spirits. By understanding that human activities are thousands of years older than we believed until now we could re-examine with new eyes myths and stories of past civilizations and traditions.

Today we are very much obsessed with the idea of progress and evolution. But let’s just pause for a minute and consider whether truly developed and civilized human beings would destroy the environment they live in, poison themselves and treat animals so cruelly? Maybe progress has not been as fast as we would like to believe.

If any images used in this article are in violation of a copyright, please get in touch with webmaster@acropolis.org.in as soon as possible. Appropriate action will be taken.
Image References
By Mike Goad | Pixabay | CC BY PD