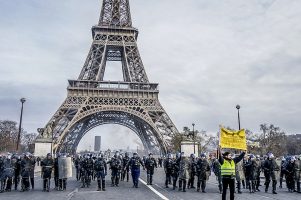 All over the world, people are rising up and demanding change. Both in the Western and the non-Western world, they are taking to the streets, protesting against corruption, growing economic inequality and injustice. In Asia, there were the ‘Umbrella Revolution’ in Hong Kong and the Sunflower Student Movement in Taiwan in 2014, protests in Myanmar last year and other student-led movements in Thailand and India.

A rising wave of successful anti-corruption movements has also led to the downfall of presidents and prime ministers accused of abusing power. To name but a few: the former South Korean president, two former Guatemalan presidents and a former Brazilian president were all sent to prison for corruption. The president of Peru, Pedro Pablo Kuczynski, resigned from office rather than face indictment over corruption charges. His predecessor, Ollanta Humana, is also under investigation. The Spanish prime minister, Mariano Rajoy, was forced from office last year due to corruption scandals in his party and Malaysia saw a surprise result last year in parliamentary elections for the same reason.

Iran has been seeing frequent and nationwide civil unrest against the government since December 2017, which has resulted in the deaths of people and the arrests of hundreds of protesters. In Europe, rising fuel prices sparked the ‘yellow vest’ movement which grew rapidly into a full-scale citizens’ revolt and has been usurped by troublemakers who have caused millions of Euros in damage. The gilet jaune movement has since been copied in 22 other countries, including many Eastern European countries.

The latest citizen-led uprising in the West is Extinction Rebellion, which only started last October with a handful of people in the UK and now has several tens of thousands of supporters here and has spread to more than 50 countries worldwide. It rebels against the failure of governments to curb climate change and calls for non-violent civil disobedience to prevent ecological collapse.

It is very encouraging to see people motivated to take action. For too long the dominant systems have not served the majority of people, and in view of the imminent global threat of climate change, Brexit and other political squabbles pale into insignificance. The current path of humanity is destructive and unjust, to say the least, and uprisings and revolutions are bound to happen since the ruling classes are unwilling to embrace the necessary changes.

Having lost faith in religion, in governments and in institutions, many are now putting their trust in ‘the people’ and are calling for governments to be replaced by “citizens’ assemblies”. But is it certain that ‘citizens’ would do a better job than the current leaders? Have we not in some way or another all contributed to the current state of the world? Do ‘the people’ have the necessary wisdom to make sounder judgments and better choices, would they be able to unite deeply divided nations, would they have the means to enforce any decisions without the backing of centuries old institutions?

Change must and will happen. But it must be accompanied by inner change. A better future will be impossible without human beings who have a strong moral foundation, a deep understanding of the world and of human nature, the ability to consider different viewpoints and create a synthesis, the ability to see the bigger picture and to put the interests of ‘the whole’ above their own personal interests. Our most urgent task is therefore not outer change. It is to bring about inner change.