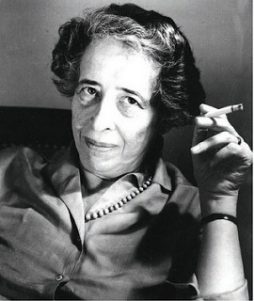 You may have noticed this year that a number of journalists have been making references to the 20th century political theorist Hannah Arendt, widely regarded as one of the most important political philosophers of the last century. Her first major work, entitled The Origins of Totalitarianism, is more than 500 pages long and not an easy read by any means. But since the election of Donald Trump, sales have suddenly shot up and people have been associating Trump with some of the characteristics of totalitarianism that Arendt analyses in her book.

We are, however – at least apparently – living in very different times. Arendt’s book was published in 1951 and arose out of her experiences of Nazism before, during and after the Second World War. She was Jewish, born in Germany in 1906. From 1932, she was prevented from working in Germany and briefly imprisoned by the Gestapo for researching Antisemitism. She moved to Paris, where, when the Germans invaded in 1940, she was interned as an ‘enemy alien’, but managed to escape. Helped by the American diplomat Hiram Bingham (son of the explorer of the same name who first discovered the ruins of Macchu Picchu in Peru), she was able to get to Portugal with her husband and mother and take a ship to the United States. Later on she covered the trial of Adolf Eichmann (one of the major organizers of the Holocaust) in Jerusalem for The New Yorker magazine.

However, her analysis of totalitarianism put Stalinism in the same basket as National Socialism, asserting that they were both driven by the same forces and used the same methods of terror, which she regarded as being the essence of totalitarian systems, not even a means but an end in itself.

Consequently, many writers have criticized attempts to portray the Trump movement as a new totalitarianism, because there is as yet no hint of the terror that characterizes true totalitarianism. What does raise alarm bells is Arendt’s assertion that one of the core elements of totalitarianism are mass movements made up of the “neutral, politically indifferent people who never join a party and hardly ever go to the polls.” Such mass movements are not confined to ‘Trumpism’, but are growing all around the world, including in Britain. It is this that should perhaps concern us, and Arendt analyses why people tend to join such movements. Contrary to the views of many anti-Trumpists and Remainers, mass movements are not followed only by stupid people. A classic example is Martin Heidegger, “one of the most original and important philosophers of the 20th century,” [Internet Encyclopedia of Philosophy] who became a member of the Nazi Party in 1933.

Arendt proposed the theory that the root cause of people’s attraction to totalitarian mass movements is loneliness, which she said “has become an everyday experience of the evergrowing masses of our century”, made up of “atomized, isolated individuals”. We may think that loneliness is confined to old or marginalised people, but it is actually extremely common in our societies. Quoting from an essay by Roger Berkowitz, founder of the Hannah Arendt Center, “The basic experience underlying totalitarianism… is loneliness, an alienation from political, social and cultural life. As a modern phenomenon, loneliness is visible in what Robert Putnam calls the loss of social capital. Americans of all classes and all political persuasions report having fewer close friends than ever before; many say they have no one they can confide in or count upon in an emergency.”

According to another great female philosopher of the 20th century, Simone Weil, “To be rooted is perhaps the most important and least recognized need of the human soul” and it is the rootless nature of modern society that contributes to the widespread sense of loneliness and alienation. To quote from the Stanford Encyclopedia of Philosophy, “Modernity [for Arendt] is the age of mass society, of the rise of the social out of a previous distinction between the public and the private, and of the victory of animal laborans over homo faber and the classical conception of man as zoon politikon. Modernity is the age of bureaucratic administration and anonymous labor, rather than politics and action, of elite domination and the manipulation of public opinion. It is the age when totalitarian forms of government, such as Nazism and Stalinism, have emerged as a result of the institutionalization of terror and violence… where homogeneity and conformity have replaced plurality and freedom, and where isolation and loneliness have eroded human solidarity and all spontaneous forms of living together.” Arendt did not believe that we can recover the past with its stability, but we can, she said, rescue its “forgotten treasure”. She also proposed the Vita Activa, i.e. fully taking part in the life of society, rather than merely following an aspiration towards personal well-being.

Other factors that Arendt highlights as the root causes of totalitarianism were the increasing power of international capital and its influence in the political sphere (since the 19th century), and the fact that society has become “wholly permeated by the ideological outlook and standards of the bourgeoisie” [Berkowitz]. This system, increasingly driven by money and therefore essentially amoral (but pretending not to be), further alienates people from politics as they become aware of the all-pervading corruption and hypocrisy. Arendt refers to this as the rise of the social, i.e. “the expansion of the market economy from the early modern period and the ever increasing accumulation of capital and social wealth. With the rise of the social everything has become an object of production and consumption, of acquisition and exchange…” [Stanford Encyclopedia of Philosophy].

Should we be afraid that the spectre of totalitarianism may be rising again? Arendt believed that fear in this sense is good: “Only the fearful imagination… thinking about the horrors” may alert us and allow us to prevent future repetitions of the totalitarian nightmare. They say that history repeats itself, but it never does so exactly. The new threats of artificial intelligence, Alexa taking pictures of you in your living room, eugenics and so many others, could combine in a lethal cocktail if mixed with mass movements that help power-hungry politicians and shadowy corporations to exert ever greater control over our lives, seeking at all times to create “a world of conditioned reflexes, of marionettes without the slightest trace of spontaneity” [The Origins of Totalitarianism]. We should be afraid, be very afraid, but only if it helps us to react by seeking true freedom and individuality in the philosophical sense (which doesn’t consist of buying a ready-made brand or becoming part of a tribe).