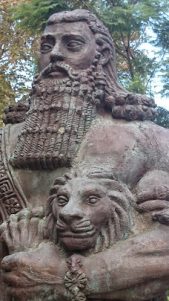 The Epic of Gilgamesh from ancient Mesopotamia is often considered to be the oldest written story in the world. There are many studies about this story which look at it from an archaeological, literary and historical point of view. However, the aim of this article is to give a philosophical perspective on the story while trying to explore the symbolism behind it.

Gilgamesh, the king of Uruk, is the oldest known hero. Like Herakles in ancient Greece (or Hercules, as the Romans called him), Gilgamesh is also a hero who fights against the forces of darkness.

Gilgamesh was the son of Enlil, who was the God of Wisdom in ancient Mesopotamia. The people of Uruk were complaining about Gilgamesh, because he was oppressing them. They prayed to the gods to create a man who could challenge him. In response, the gods sent Enkidu, a hybrid man-animal who ate and drank like an animal and lived with the wild beasts. After a long battle, Gilgamesh and Enkidu became inseparable friends. Together they went on various journeys and passed difficult trials. Their first journey began in the Cedar Forest, where they had to overcome an attack by Huwawa, the guardian of the forest. “Life in the forest” represents our personality which changes depending on our desires. And the guardian of this forest represents our pride which we carry throughout our lives. The first task for Gilgamesh and Enkidu was to overcome pride.

They then continued their journey across rivers, mountains and fields, encountering wild animals, fire and bulls, and overcoming the trials set before them.

At the end of their journey together, Gilgamesh had to face the trial of losing his friend Enkidu. He mourned the death of his friend for seven days and seven nights. When Gilgamesh finally accepted the death of Enkidu, he started to question the meaning of life. “Shall I not die like Enkidu?” He sees that the only way to escape from death is to gain immortality. So he goes in search of the survivor of the Great Flood, Utnapishtim. The rest of the myth tells the story of the flood and the journey of Gilgamesh in his search for immortality.

Gilgamesh is not only a hero from the myths of Mesopotamia but, as in many myths, his existence has a correspondence in each of us. His trials are also similar to our difficulties in life. He tries to teach Enkidu to be civilized; as our wild, animal nature needs to be educated. Finally, his questions about life when he meets the trial of death are questions that belong to any human being who is seeking a life beyond the purely material level.