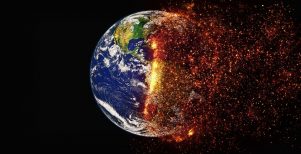 Climate change has been a hot topic for a long time, with some saying it is pure fiction, whilst others have pointed out the many signs of change and their likely future consequences. It is now well understood by the scientific community that climate change is and always has been a natural phenomenon, but many studies have also shown that human activity could be a significant factor in its development.

Everybody knows about the ice ages that have occurred throughout the history of planet Earth and that we “recently” came out of a 100,000-year ice age about 12,000 years ago. It means that ice ages evolve slowly and it would take a cataclysm to change our climate in just a few decades or even centuries. So it would not be impossible that our ever-increasing presence and our activities might have an influence over our planet’s climate.

Some of the detractors of climate change who see it as a fiction mostly look at the weather in isolated cases to “prove” that there is no such thing as global warming. However, the climate of a region is defined as an average over a significant period of years or decades. What scientists and meteorologists have actually measured and studied is a climate evolving towards a state of global warming. In order to be relevant, these measurements have been carried out in the oceans and at the poles, where the temperature would normally take centuries to evolve.

Other detractors of global warming say that if there were changes in the climate similar to those of past ice ages, they would be purely natural and man could not in any way be a contributor to this effect. Except in the case of cataclysms such as gigantic volcanic eruptions or large meteor impacts, the Earth’s climate has taken centuries and millennia to change. However, scientific measurements have shown a sudden and significant increase of greenhouse gases such as carbon dioxide and methane in our atmosphere. These gases must have come from somewhere and the most likely source is human industrial activity. Which makes it more suspicious that the most active detractors are, for the most part, linked with the fossil fuel industry…

In any case we can use the wise words of Socrates, who said “I know that I know nothing.” In other words, we could say that “I can say for certain that I cannot say anything for certain,” meaning that belief is necessary but not enough to get to the truth. As philosophers, whether scientists or not, it is our responsibility to investigate, to gather the facts and draw reasonable conclusions in order to get ever closer to, yet never fully reaching the truth.