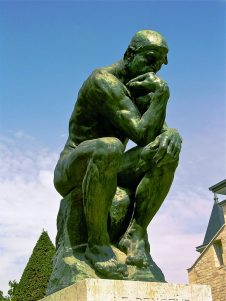 Thought: a female head emerging from a block

her hair blown by the wind,

her eyes fixed on the above,

grasping the essence of things.

Not the thought of the anguished intellectual,

of an empty being

who wants to impress;

but the grand imaginings

of a soul emerged from the divine,

a child of Zeus, born from his head,

broken open by the axe of Hephaestus[2].

Free! That is the word that summarizes Thought.

Free to range across the expanses of the mind

Seeing all, encompassing all,

understanding what other beings can only sense.

In other times, Thought was cultivated,

recognized as the essence of the human being.

Now thought is reduced, minimized and

And the female head mourns,

calling to the visitors to the museum,

will remember and say,

to dream, to penetrate the secrets

of God, the Universe, the Soul.

The philosopher Descartes famously said ‘Cogito ergo sum’ (I think therefore I am). Whatever he meant by that, we can extend it to mean that without thought we are not truly human, for it is thought that distinguishes the species of homo sapiens.

I would like to briefly consider the value of thought, which perhaps we too often take for granted. In Greek mythology it is said that when the different creatures were being endowed with their distinctive powers and abilities, there was a mistake in the process and human beings were left with nothing. So in order that they would have something to enable them to survive and flourish in this world, the brave and compassionate Titan, Prometheus, went up to Mount Olympus and stole some fire from Heaven, carried it down to Earth in a hollowed out reed and gave it to mankind.

With that fire, which is none other than the power of thought or mind, we built cities and artefacts, wrote books and studied the nature of the universe, becoming in some ways like the gods themselves. Perhaps that was why Prometheus was so harshly punished by Zeus.

The medieval philosopher Thomas Aquinas distinguished between two types of intellect or thought: the speculative and the practical, the former being concerned with truth and the latter with action. In this way, we may speculate on the nature of being and existence, or we may wonder whether there is enough milk in the fridge to make a cup of tea. Both types of thought are necessary, but it is the former that produces the great works of literature and art, or the great discoveries of science and metaphysics.

We are in no danger of losing the faculty of practical thought, for as Locke pointed out, at least when we are awake we are constantly thinking about something. But we may be in danger of losing our ability to think in a more metaphysical (beyond the physical) sense. This is a faculty that needs to be actively cultivated, otherwise it may atrophy.

On a number of occasions we at New Acropolis have conducted street surveys and interviews, where we have asked people for their views on different philosophical topics. Some people, naturally, are not interested, but others have been delighted to engage in thoughtful conversation and some have even been moved almost to tears, because they realise that such opportunities for deep conversation are so rare… and yet so human.

My poem, therefore, despite its undoubted lack of artistic merits, is a call to the human soul to cultivate the sacred art of thought, which begins and perhaps ends with reflection – upon oneself, upon nature, upon humanity, and not forgetting all that may be beyond, because thought should never be separated from intuition, or even from certain higher types of emotion which the ancients used to refer to as ‘divine passions’.

This poem is loosely inspired by Rodin’s sculpture ‘Thought’ which was exhibited at the British Museum in 2018.

Article References
2] A reference to the Greek myth of the birth of Athena, goddess of wisdom and patroness of the arts. [3] Used here as a gender-neutral word derived from the Sanskrit root Manas = Mind, the capacity of Thought.
Tags: mind, Rodin, thought