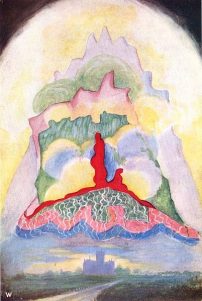 What is thought? From a materialistic point of view it is just an accidental result of biological evolution, the reaction of the brain to certain stimuli from the environment. But for many thinkers, such an explanation is inadequate, in view of the immense richness and complexity of human thought. An alternative explanation of the mysteries of thought comes from the world of ‘occult’ or esoteric studies: it is the concept of ‘thought forms’, a term popularised by two Theosophists of the early 20th century, C.W. Leadbeater and A. Besant.

In the esoteric conception of life, ‘matter’ not only refers to physical matter in all its aspects, from rocks to gases and atoms to black holes. It also includes subtle states of matter such as energetic matter, astral matter and mental matter – “such stuff as dreams are made on”, as Shakespeare put it.

In The Kybalion, one of the seven universal laws is “Everything vibrates”. Just as light and sound are states of vibration, which travel through the air and produce perceptible effects, so thought is a vibration which also has its effects. And just as we know that the colour red vibrates at a slower rate than ultraviolet, which as a result cannot be seen by the human eye, so mental matter vibrates at a far higher speed than physical matter and also cannot be detected. So we can picture the mental world as being made up of a very subtle kind of matter, which nevertheless has form, because all matter, however subtle, has form.

Another way of looking at it is through the lens of one of the other hermetic axioms from the Kybalion: “All is mind. The universe is mental.” If we look at everything around us – our modern cities with their buildings, their systems of sanitation, communications, hospitals and all forms of social and commercial organisation, what is all this but the production of the human mind, a concretisation of thought? And we could go further: if we look at Nature and the entire universe: would this not also be the concretisation of divine thought, the product of the Mind of God, as the Hermetic philosophers called it? And if we are surrounded by the materialized forms of thought, whether human or divine, will not the original thought forms that gave rise to them also exist on some plane not visible to the eye, but intelligible by the mind and perhaps even visible to those who have developed certain inner senses?

Let us now look at our own thought forms and what effects they can have, on ourselves and others.

According to the theosophical writers mentioned above, thought forms have three aspects: a form, which reflects its nature; colour, which conveys its quality; and a definiteness of shape or outline, which indicates its clarity. These forms arise from our ‘mental body’ itself, which emits a vibration. That vibration goes outside the mental body and causes the surrounding ‘mental matter’ to vibrate in accord with it, causing a mental form to arise. The final stage in this process is that the mental form is then inhabited by a ‘temporary elemental’[1] which gives it life: it becomes a living being of sorts. If the original mental vibration is weak, then the thought form will soon dissolve into the mental atmosphere; but if it is strong, and its thinker continues to ‘feed’ it by repeatedly thinking about it and developing it, then this living thought form will become increasingly stronger.

One can easily see that this process can be potentially dangerous to the thought-producer, because if the thought is not the product of his own free will and choice, but of his uncontrolled desires, passions or fantasies, the thought form can take on a life of its own and turn into a tormenting obsession.

However, if the thought is conscious and produced by the will of the thinker, then it can be used to create the mental world that we want. If we would like our mental world to be populated by lofty, beautiful, philanthropic thoughts, we can deliberately cultivate such thought forms by thinking along those lines and selecting the reading material, the films and videos we watch, the music or podcasts we listen to.

According to those who can perceive such forms directly, through clairvoyance, a pure thought form is a thing of exquisite beauty, in its form, colour and outline, whereas a thought such as greedy ambition, desire for revenge or envy has a repellent appearance on the mental plane. In reality, we cannot speak in this case about the mental plane, but rather about the mental-astral plane, because such thoughts are more emotional than mental.

We are all subject to low thoughts, but by cultivating higher ones, the lower ones increasingly feel ‘out of place’ and give way to the higher, which are essentially stronger.

Another interesting aspect is the effects of one person’s thoughts on others. Let us imagine that we have the privilege to be in the presence of a Master of wisdom, or at least a person at a higher stage of spiritual development than ourselves. Can their thoughts and vibrations affect us? Yes, as we have probably all experienced, and this is because there is something in the thought vibrations of our own mental world that responds to the thought vibrations sent out by the teacher. When this happens, then our whole consciousness vibrates in unison with their thought and we are lifted up temporarily to their level, or at least to that part of it that we can respond to. It would be different if in the audience there is someone in whom such vibrations have not yet been awakened, because they have not been cultivated. He would be, in the Buddha’s words, ‘like the spoon which does not taste the soup’, even if it is immersed in it.

This can then be extended on a much larger scale, when a strong thinker, whether religious, scientific, artistic or political, gives out a message to the world. After being adopted by those who immediately resonate with it, the thought form grows stronger by being thought by its adherents and becomes a collective thought form which can sometimes affect millions of weaker minds who are influenced by it, just because it is so strong and makes them believe it must be true. We can see this in history (and in the present) for good and ill, depending on the quality of the original idea. It is the power of public opinion.

But just as a person whose mental body does not resonate with the vibrations of another person is therefore not affected by their thought forms, whether good or bad, so if we cultivate our own mental world we can avoid being influenced by public opinion if it does not accord with our own self-developed thinking. The most important thing is therefore to develop one’s own thought forms and become ‘Freethinkers’ in the best sense of that term.

Article References
[1] An elemental is defined in the Mahatma Letters as “one of the semi-intelligent forces of the kingdoms.”
Tags: Annie Besant, Kybalion, mental world, mind, thought