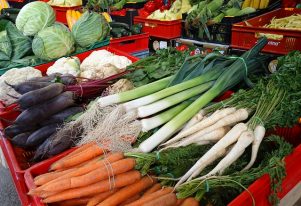 In liberal-thinking circles it is fast becoming almost an article of faith that eating meat is bad for the planet and a plant-based diet is the only ethical way forward. In a book entitled The Vegetarian Myth, however, Lierre Keith, who was a vegan for 22 years before ill-health forced her to change her diet, disputes this view in a well-researched but vegetarian-friendly onslaught. This article is a brief summary of her findings.

The author divides her critique into three parts: ‘Moral Vegetarians’, ‘Political Vegetarians’ and ‘Nutritional Vegetarians’. She has sympathy with them all, having been one of them herself, but believes their views are misinformed.

We are often faced with statistics like the following: it takes 12 to 16 pounds of grain to make one pound of beef, and that grain could be used to feed the hungry of the world. The problem with this statistic is that it is based on animals which are fed grain, in other words, animals which are reared in what are called in the US ‘concentrated animal feeding operations’ (CAFOs). This is Orwellian double-speak for factory farms, where cows, chickens and pigs never see the light of day, which unfortunately account for most of the meat that people eat today.

But let’s go back about a hundred years or less, basically before the 2nd World War. Farms were smaller and ‘mixed’: some vegetables, some crops, some fruit and nut trees, some animals. The cows on such farms would eat grass or, in winter, hay. They were not fed grain. Their stomachs are not designed for it, so it makes them sick. But it also makes them grow faster, so it makes for a more profitable operation.

Keith explains that this change in farming came about with the invention of synthesized nitrogen fertilizer. This made it possible to produce enormous quantities of grain, which then resulted in a vast surplus. What to do with the surplus? Part of it is exported (mostly to poorer nations, thus destroying their previously self-sufficient rural communities and forcing farmer-peasants to migrate to big cities), and part of it is fed to animals. The grain surplus was therefore the root cause of the factory farming system which has become self-perpetuating.

If cows graze on grass, the statistic I mentioned earlier becomes meaningless, because grass is free and moreover the animals fertilize the soil with their urine and faeces, improving the topsoil and doing away with the need for chemical fertilizers.

The ideal alternative to factory farming proposed by the author is ‘rotating ruminants on perennial polycultures’ and she cites Joel Salatin’s Polyface Farm in Virginia as a model. Unfortunately, half the world (at least) is now dependent on the industrial agricultural system, which is also entirely dependent on fossil fuels. Sooner or later, with the increasing scarcity of fossil fuels, water (it takes anywhere between 250 and 650 gallons of water to grow a pound of rice) and topsoil (which is being constantly eroded by this system of agriculture), this system is going to crash. In the meantime, it is not a good idea to promote the consumption of more grains and more soy (which needs a lot of energy-intensive processing to make it edible for humans), but more mixed farming in which livestock play an important part.

What about the moral aspect of vegetarianism? Do we have the moral right to kill animals in order to eat? Keith’s take on this has many aspects, but at its root is a philosophical position which she describes as ‘animist’. Everything is alive (including insects and plants), every life is sentient and precious, and as such should be respected. But, as happened (and still happens) in many traditional cultures, there is a recognition that we are all interdependent and life feeds on life. Death is part of life and we will always be indebted to other lives for our life. This is ‘adult knowledge’ (according to a Mayan elder).

Finally, regarding the ‘myth’ that vegetarianism is better for you than eating meat, the chapter on ‘Nutritional Vegetarians’[1] presents many counter-arguments. One of the author’s claims is that the healthiest people in the world are generally ‘herdsmen-hunter-fishermen’, such as the Masai of Kenya who “eat a diet almost entirely of meat, milk and blood”.

This book is surely going to ruffle some feathers, but it does show that the picture is not as simple as some would like to paint it, and that the mass production of grains and soy is at least as harmful to the environment and health as factory-farmed meat. Perhaps we should remember what so many philosophers of the East and West have repeatedly said: the middle way, the golden mean, is best.