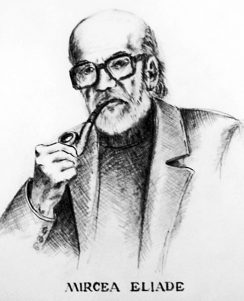 Nowadays myth is sometimes perceived as something opposed to reality – a fictional tale without connection to real life. Such an understanding has existed for quite a while, having its roots in the ancient world. It was especially prominent in the 19th century, when myth was considered as a primitive outdated counterpart to science or philosophy.

However, in the 20th century anthropologists and other researchers started studying myth not only as a stage in human history before the birth of thought, but as something meaningful and valid that could contribute to an understanding of the world. The literal interpretation of myths was replaced by allegorical and symbolical research. Myth began to regain its importance as human beings regained their symbolical thinking.

A special place in uncovering the deeper meaning of myth belongs to Mircea Eliade, a Romanian historian of religions and philosopher, professor at the University of Chicago. He recognised that the myth is a complex cultural reality which could be considered and interpreted from different viewpoints. However, he defined myth as a narration of a sacred history of how reality came into being. That reality might be the whole (the Cosmos), or just a part – an island, a species or an institution.

Eliade describes two dualities of time and space: sacred and profane. The profane consists of everyday, ordinary life, while the sacred is the existential, it contains the essence or in other words the reasons and purposes of things. Myth enables us to discover the sacred, and recreate it.

Another important characteristic of the sacred that Eliade discovered is that it is an element in the structure of consciousness, not a stage in the history of consciousness. In other words, when it is denied, we deprive our consciousness of an essential part of itself, with the result that it will irrupt in some other, often negative or ineffectual ways.

In his more detailed definition of myth, Eliade asserts that in the myth a “sudden breakthrough of the sacred” takes place, which “establishes the world and makes it what it is today.” Myth is contrasted with stories that do not pertain to the structure of reality, but are connected with only some elements of it, for example, how certain anatomical or physiological peculiarities of animals appeared. It is myth that tells the story of the creation of the world in which human beings find themselves, whereas stories usually do not affect the conditions of human life. In addition, stories can be told anywhere and anytime, while the myth requires a special time as well as the transmission from the teacher to a neophyte, which emphasizes its importance and its function of revealing a mystery.

What is that mystery? Myth takes us to the illo tempore – time at the very beginning of everything, when that everything was conceived of and created. Therefore, to know and understand the myth means to know the secret of the origin of things, which means where and how to find them if they disappear. By describing the beginnings, the myth contains the reason for the existence of that which began, and therefore provides the possibility of returning to that reason, a better understanding of the purpose. This in turn results in renewal, as well as allowing for correction and development. It contains archetypical patterns of the unfoldment of life.

The myth also expresses and codifies beliefs and guiding rules for society. It describes the deeds of supernatural beings and becomes the model for human behaviour. It reveals “the exemplary models for all human rites and all significant human activities – diet or marriage, work or education, art or wisdom”. In the words of Bronislav Malinowski, myth “safeguards and enforces morality; it vouches for the efficiency of ritual and contains practical rules for the guidance of man. Myth is thus a vital ingredient of human civilisation.”

Studying and understanding myth provides a deeper knowledge of the human being and, according to Eliade, would lead to “a new humanism” on a worldwide scale.