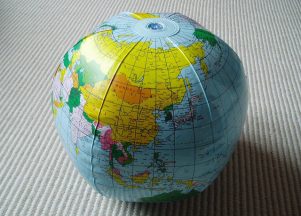 It will not surprise anyone if we say that the world we are living in has become “global”. Although this globalization was initiated at the political and economic levels at the end of the second world war, it became subject to a huge acceleration at the end of the 20th century, first with the development of the internet, and then with social networks and smartphones.

At the same time, the limits of globalization have also become apparent. Physics teaches us that a vector oriented in a specific direction will always produce a reaction in the form of an opposing force, in the opposite direction. Everything in life produces its own “opposite-complementary”. Just as we produce our own shadow when we walk under the sun, the advent of globalization has produced an opposite force leading to separation and isolation.

The way globalization is implemented does not work. It apparently offers freedom by eliminating borders (as in Europe) for people and goods, but in reality it has enforced a control over personal data with the help of new technologies, it has created a huge system of surveillance and limited individual freedoms worldwide. On the opposite side of the coin, isolationism leads to separation, as a way of protecting individual and/or national freedoms, and separation usually leads to opposition and conflict between the parts (nations, faiths, ideologies…).

This phenomenon of “two sides of the same coin” is not new. Before globalization and isolationism we had an opposition between capitalism and communism. Neither was able to find its identity in total independence from its “shadow”. In fact, the foundations of our society are based on many such pairs of opposites, where one side is always fighting the other one, and where none has proven to offer a real solution and hope for a brighter future.

In a way, this is absolutely normal, or rather, it is absolutely “human”, because it is through the lens of duality that the human intellect perceives and analyses the world.

But in considering that this dual state of the world is normal, it does not mean that we have to allow ourselves be led by it. After all, it is normal that we all have emotions. But it doesn’t mean that we have to let our emotions lead or control us, and someone led by his emotions would usually be considered immature and unfit to lead others. It is accepted that the intellectual, rational and dual mind has to prevail.

But the dual mind has failed to offer a true solution. So why not consider this dual way of viewing reality as one way of understanding the world – like our emotions – but not necessarily the ultimate way. I mean, if we consider evolution as a constant movement, and if we accept that this movement brings changes and transformation, then after thousands of years of “duality” it may be legitimate to ask a simple question: “What is the next step?” And what can possibly be the next step after duality, if not unity?

For us, this unity is called HUMANITY, and we – as individuals, as nations, as all the faiths and all the ideologies – are all parts of this Humanity. Theoretically, this is easy to understand. But do we IDENTIFY with Humanity? Are we really consciously part of it? I think not…far from it.

However, I do believe it is possible. After more than 30 years as director of the New Acropolis School of Philosophy in Israel, and nearly 40 years following the path of philosophy in the classical tradition, I have had the opportunity to see many people, young and not so young, walking the Path and reaching a new state of identity. Everyone can reach their own humanity, but it is not enough just to understand it and agree with it. It is necessary to live it. To do it. To be it.

This, in my view, is the most necessary revolution for mankind today and I invite everyone to dare to join it.