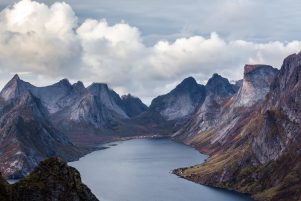 “Earth provides enough to satisfy every man’s needs, but not every man’s greed.” – M.K. Gandhi

Very often I hear from friends, “I want to be one with Nature.” For most people this means visiting some remote forested place rich in wildlife, or vacationing at some scenic location like a hill station or beach. Usually, there is a hope to experience something different, return rejuvenated. And so, the aspiration of ‘being one with nature’ is reduced to getting something from her. But when visiting such places of ‘natural’ beauty can we become more conscious of the relationship between Nature, the Earth, and ourselves? Can there be more consciousness when relating to the Earth, to see the unity amongst everything on Earth, including the Earth itself? Do our actions reflect respect for the Earth? Let us examine this connection. What are we doing to Nature, and can we rectify the situation?

Modern Science, based on empirically proven data, classifies things into living and non-living entities. Instead, the esoteric tradition teaches us that everything is alive. It is perhaps therefore, not a coincidence that we address our planet as Mother Earth; meaning that there is a very deep relationship with it. Not only has the Earth given birth to everything, but it continues to care and sacrifice itself to nurture all life that resides on the planet. It provides for our needs like a mother would care for a baby. Over the years, however, Man has taken his mother for granted, as if she will find a solution to every problem we create. We must collectively hold ourselves accountable, because in reality, what we do in one part of the planet, say in Mumbai clearly has an impact across the planet, and its effect can be visible even in faraway places like Norway, where I recently had the opportunity to visit.

It was one of my most unique experiences; I found myself face-to-face with Mother Earth at her most pristine. The gigantic mountains, fjords, crystal clear lakes, and lush forests, made me realise how small a part of the whole we are, and that the Earth is herself a vibrant living being.

As I observed the natural features, I recognized that we can learn and take inspiration from her:

1. The Earth seems to have the need to evolve, and contemplates its own higher nature. I saw in Norway, Nature herself in the reflective solitude required to facilitate this connection; the stoic stillness and silence, as if in deep meditation was visible in the fjords, in the waters, as well as the mountains.

2. The Glaciers, which formed the fjords during the Ice Age, continue to selflessly replenish water in the rivers and lakes, providing a stellar expression of service and sacrifice without any expectations of return.

3. Unity in the diversity. Vistas are washed with different hues of green, composed of varying sizes of trees. Yet they seem to be growing in an orderly and even symmetric manner at times, giving the impression that they were artificially planted, by harmonizing differences. At the same time, the ecosystem hosts a variety of life forms, both simple and complex, like insects, worms, birds, and animals, without differentiation; maintaining the unity amongst them all and at the same time recognizing and respecting differences.

But there was also a lot of evidence of the consequences of man’s insensitivity towards the Earth.

1. High temperature, despite being so close to the Arctic Circle, was the first red flag we saw. Unseasonal rains, and extreme heat or cold climate, are said to be likely caused by man’s actions. One obvious result is that the glaciers and gigantic fjords, some as old as the Ice Age, have been reduced to a few square kilometres of thin ice in many cases, which too is melting away very quickly.

2. We saw bald patches; entire regions where the trees were obviously flattened for commercial considerations.

3. Many mountains were quarried for building materials.

5.Large cruise ships carrying 300-400 tourists were docked at each of the small towns we visited. One can’t even imagine what their sometimes irresponsible and careless presence would be doing to the environment.

In nature everything happens with order and rhythm. When we disturb this rhythm, it gravely impacts the Earth, leading to evidently catastrophic consequences. As the Earth becomes sick, man is also bound to become sick. We are not separate!

Can this be rectified? Varying debates offer a variety of stands. But what is irrefutable is that we must take responsibility to moderate further damage. Is it a problem of needing new technology, or new regulatory laws?

Norway is legislating 100% conversion to battery-operated vehicles by 2022 and doing away with fossil fuels. Use of solar and wind energy to generate electricity is helpful, but we might observe that often it amounts to treating symptoms. Perhaps, the root of the challenge at hand lies in our attitude towards the planet at large, and the change that is called for, therefore, is an internal change of attitude.

As philosophers we acknowledge that change starts and ends with us.  It seems to be a question of identity – to overcome separation, and to really learn to belong – to really recognize and live as part of nature, in harmony with her laws, by expanding our Consciousness, beyond personal interest, to include collective welfare; because “what is good for the beehive is always good for the bee.”

It is imperative for all of us to remove the separation in our minds as well as our actions, between all the components of nature. Bringing this attitude and forging a deep connection on a day-to-day basis with our surroundings, and even everything far out in the universe, both visible and invisible. Perhaps such an enriched identity might help us preserve the wellbeing of the planet, our Mother Earth.