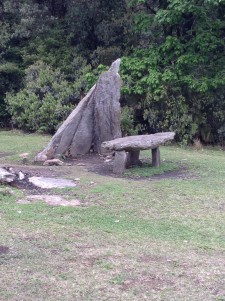 India has a long tradition of the creation and maintenance of sacred groves; there are about a 1000 square kilometers of undisturbed sacred groves, scattered in patches all over the country. The groves vary in size, from just a few trees to large expanses of dense forests, and lie mainly in the hilly and mountainous areas of India such as the Himalayas, the Western Ghats and central India, where some ancient practices have survived, sometimes still in their pristine form. Even today, many communities remain devoted to protecting their local groves. Within these groves, typically no one is permitted to cut any tree or plant, kill any animal or bird, or harm any form of life; all creatures within the grove’s confines are given protection by a presiding deity. In the evolution of religion across the world, sacred groves once played a vital role; it rests on the earliest conceptions of the unity of life in nature, in the sense of communion and fellowship with the divine center and source of life.

“People have worshipped forests since the Palaeolithic age, thereby preserving them. In ancient Greece and Rome,  initially these forests began as open-air temples. Many contained streams and lakes that were also considered sacred, and no one was allowed to fish or pollute them.” (Fazer, 1890)

There is very little evidence of temples existing in India during the Vedic period, nor can many be found in the pre-Buddhist period.

“The various gods and goddesses, whom the indigenous population of India worshipped, were not accustomed to dwell in the secluded atmosphere of temples; they were placed in the open air.” (Hastings, ed., 1934).

Even today, for the gramadevata, or village goddess, of South India there are no temples in many villages. The deity may be in the shadow of a big tree or lodged in small shrines. In a good number of villages no object is placed to represent the deity and a tree itself is regarded as the embodiment of the deity. One of the most widespread traditions prominent today in India is the protection of Ficus trees, varieties commonly known are the Banyan and Peepal trees, which dot the countryside and are often the only large native trees found in the midst of towns and cities.

“The sacred grove was at the origin of the temple, whose columns were initially trees, and later of the Christian church which still evokes it by the alignment of its pillars, the semi-darkness within it, and the soft coloured light that filters through its stained glass windows.” (Brosse, 1989)

Apart from historical, cultural and spiritual significance given to sacred groves one cannot dismiss the huge ecological impact that such groves have. Studies of sacred groves reveal that they are priceless treasures of ecological and biological value. In India, these are often the only remains of the native flora, whose presence in the landscape is dramatically observable on large deforested and terraced slopes. In my recent trip to Meghalaya the original vegetation could only be found in sacred groves which are found scattered in small pockets amongst the vast rubber, spice and beetle-nut plantations. Coupled with heavy pressure of population growth, these groves remain the last refuge for rare plant and animal species that once covered these lands.

“Sacred groves probably represent the single most important ecological tradition of ancient Indian culture. Their conservation is a long tradition of conserving nature by giving it a spiritual dimension.” (Krishna and Amrithalingam, 2014.)

On a planet where today man seems to be in constant battle for survival through maximum exploitation of every natural resource, perhaps the key to our survival lies in our own past; in understanding the role of man as integral to nature and not that of opposition or competition. The survival and evolution of man does not need to be in an either-or kind of relationship with nature; rather it would be worthwhile for us to study core ethical and philosophical practices from various civilizations of the past like the Native Americans, Egyptians, Mayans, etc. who learnt not only to survive, but flourish over thousands of years in perfect harmony with their surroundings. It is said that the forests and mythical gardens of Babylon vanished after the disappearance of humanity from the valley. This lends support to the idea of the symbiotic relationship that man had in the use and maintenance of these spaces; the disappearance of the civilization refers not only to the disappearance of human beings, but the entire ecosystem that supported life and nurtured the civilization.

Says Ashton (1988), a tropical forest ecologist, on the traditional Indian perceptions of the sacred in nature: “The ancient tribes of settled people, saw themselves as one with the natural world, as both custodians and dependents. Even today the people of India continue to harvest an astonishing diversity of products from the forest. Forests of the mountains and watersheds have traditionally been sacred; springs and the natural landscape in their vicinity have attracted special veneration. We can learn from our predecessors of a millennium ago, through mythology, sociology and a study of ancient methods of irrigation that this system of maintaining a natural balance has enabled the most intensive yet sustainable agriculture humanity has so far devised.”

A study of ancient texts and philosophical ideas from around the world suggests that man is a unique link in the evolutionary chain, with the possibility to clearly understand where we are coming from, where we need to go, and what we need to do here today in order to get there. It suddenly opens up a whole new and refreshing perspective with which to interact with our planet and the way we relate to other beings that occupy it.

What differentiates man from other living creatures is his ability to think. With this, perhaps, comes a responsibility. The role of man is that of support and never of exploitation and destruction. We are all part of one world and our evolution as a species is intrinsically connected to everything else in it; may it be mineral, plant or animal.

The disappearance of sacred groves is not coincidental. In fact, it can be seen as a direct reflection of the state of our relationship with the natural world. In working with nature as an intrinsic part of our lives there may be a hidden key that may help us recognize, and practice, our role of being human.