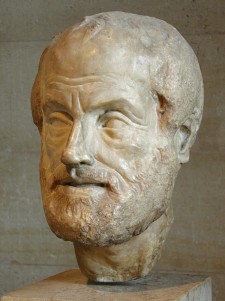 We owe to the Greek historian Diogenes Laertius most of our information on the life and works of this philosopher, who, together with Socrates and Plato, symbolize Western philosophical inquiry. He was born in 384 B.C. in Stagira (Thrace) and died in Chalcis (Euboea) in 322 B.C. His father, Nicomachus, was physician to Amyntas, the father of Philip and king of Macedonia. On the death of Nicomachus, his relative Proxenus took charge of the young Aristotle until, at the age of 17, he moved to Athens to enter Plato’s Academy as a pupil, remaining there for twenty years until the death of his teacher in 347.

It has been conjectured as to whether his departure was related to the fact that he was not elected as Plato’s successor to lead the philosophical school, or whether it was due to the war between the Macedonians and Athenians, begun in 359. The fact is that, together with Xenocrates, he moved to Assus and there married Pythias, the adopted daughter of the tyrant Hermeias, by whom he had a daughter, Pythias. It is worth underlining the fact that Hermeias, as well as being his father-in-law, could be described as a disciple of the philosopher, as shown by his last words when he fell into the hands of the Persians and was tortured: “Tell my friends and colleagues that I have not yielded or done anything unworthy of philosophy”. On the death of his wife Pythias, he lived with Herpyllis, by whom he had a son, Nicomachus, to whom he addressed a treatise on ethics.

During his stay in Assus, he established a school with some fellow students from the Academy, including Theophrastus, who was to become his successor at the Lyceum. From there he moved to Mytilene, a city on the island of Lesbos, until Philip summoned him to the Macedonian court in 343 to undertake the education of his son Alexander, then thirteen years of age.

At the age of forty-nine, in 335, Aristotle returned to Athens and founded a new center of learning, the Lyceum. However, the death of Alexander exacerbated the Athenians’ hatred of the Macedonians and he was threatened with a trial for impiety, so he was obliged to take refuge in Chalcis, where he died, aged sixty-two.

Andronicus of Rhodes carried out the task of compiling Aristotle’s works in the first century B.C. His prolific intellectual output is divided into two large groups:

The following is a summary of some of his most well-known assertions:

He deals with the subject of philosophy in the Protrepticus (exhortatory discourse):

Aristotle uses the word theoretical to designate the type of knowledge whose object is to know for the sake of knowing rather than for any purpose outside itself; it also refers to the way of life, which consists in devoting oneself to that type of knowledge, that is to say intellectual virtue, to which moral virtue is subordinate.

To be a man is in some way to go beyond the humanity in ourselves, since access to the contemplative life is beyond the human condition and man gains access to it “insofar as there is something of the divine in him”. Aristotle maintains this objective as a mere desire, but does not explain how to gain access to that condition.

Divergences between Plato and Aristotle:

Aristotle’s main criticism of Plato refers particularly to the doctrine of the ideas and their separation from the sensible world. Plato’s excessive abstraction led Aristotle to deny the ideas.

The immanency of Aristotle with regard to the knowledge of the soul only recognizes the transcendence of the intellect, but is unable to solve the problem of dualism. While for Plato philosophers have the duty to spend time in political life, for Aristotle philosophers should restrict themselves to teaching politicians, without any political commitment to leading others.