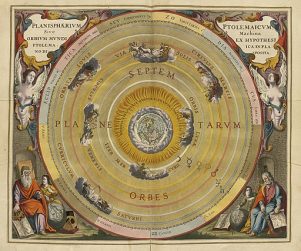 The European Renaissance was a period in history in which important philosophical ideas and teachings derived from antiquity witnessed a rebirth. In this period of eclecticism and creativity in which many ancient ideas were re-formulated the human being took central stage. Thus a sentiment of ‘rebirth of the human spirit’ took form within various disciplines: the arts, science, politics, philosophy, religion and also esotericism1.

The study and practice of astrology, in particular, helped to forge this new ‘spirit’, especially in the rediscovery of Neoplatonic and Hermetic philosophy. Astrology in the Renaissance became capable of providing explanations for the birth, growth and decline of the material world. The celestial realm (of the Zodiac and the Planets) provided a link in the Great Chain of Being, acting as an intermediary between the Platonic world of Ideas and the world of phenomena composed of the four elements (Fire, Air, Water and Earth). Astrology also provided a vision of an ordered and ensouled Cosmos, where spiritual correspondences united all things in existence. The unmovable and well-constructed harmony of the Zodiac and the perfect symmetry of the seven planets with the sun at its centre, helped to bring a sense of existential security and confidence to Renaissance man.

Thanks to this encompassing astrological vision, the humanism of the Renaissance gave birth to a new kind of individualism which saw cosmopolitanism as its highest expression. The individual believed himself to be at home in the entire universe. To this universal world-view corresponded the astrological universalism which penetrated all fields of knowledge and human life so that the human being could feel integrated into the universe. Here we also find the concept of Homo Universalis, the polymath, such as Leonardo da Vinci.

Astrological teachings helped to answer philosophical and existential questions in the field of politics, art, religion, medicine, agriculture, to name a few. Above all, astrologers were regarded as experts in matters concerning daily life. They provided pre-natal advice, served as matchmakers and marriage advisers. They informed clients where to look for stolen objects or alerted them to the sudden appearance of thieves. Physicians cast horoscopes to identify the causes of illnesses. Astrological considerations determined the nature and timing of treatments, the selection of drugs and the use of charms. Astrologers also acted as investment counsellors to bankers and tradesmen and advised kings and princes on their political or military campaigns.

The aesthetic quality of astrological principles and concepts inspired especially the field of art. Planetary symbolism abounded in the visual arts, in architecture and landscape design. Zodiacal constellations decorated the halls of popes and princes. On festive occasions processions of chariots carrying planetary gods moved through the streets. Modern theatre buildings had a round form to imitate images of the heavens. For instance, plays at the Globe Theatre in London were performed under a huge zodiac. The aesthetic value of astrology could also be found in many literary works and in didactic poetry2.

In the Renaissance, thanks to the widespread use of the astrological almanac, ordinary people had access to weather forecasts and to information concerning farming: the best time to plough, plant, harvest or fell timber. Its influence was so great that in the mid-seventeenth century, the total number of astrological almanacs printed in England exceeded the number of Bibles!

In the Renaissance, Astrology and Magic had an especially fruitful relationship.Through the concept of Spiritus Mundi, Marsilio Ficino imbued the planets with soul so that they could influence the human soul directly. This view was also shared by Giordano Bruno, who even saw in the heavens a hierarchy of superior intellects who were granted influence over terrestrial and human affairs.

Occult planetary influences were probably the ‘major premise’ of Renaissance astrology. In the words of Giambattista della Porta, “Things here below…serve those above; and those celestial in turn, from their divine natures impart to us a certain virtue bringing about the generation of corruptible things within a regular and continuous order, and their decay”3.

But in the astrological magic of the Renaissance, Man – the microcosm – the bearer of the cosmic image and the creative powers of the cosmos – does not passively reflect the Macrocosm, but can consciously participate and engage in it. This sympathetic correspondence between the human soul (i.e. the Microcosm) and the various kingdoms of nature (higher and lower) is at the basis of astrological magic. A relationship based on those invisible links (or chains) which connect the planetary intelligences to their manifestation (and to the human being) through an hierarchy of animating powers.

This was not a static but an interactive type of relationship with the astral world (literally, the world of the ‘stars’). One which needed to be supported by ritual actions and talismanic magic4. A relationship which aligned the astrologer-magician, his actions, the materials and images used and the astrological timing, under the same planetary chain. Harmonisation and participation within a certain planetary chain is what was implied in this form of astrology.

The astrological magic of the Renaissance is essentially the art of aligning oneself with the cosmos. It is the recognition of this inborn connection and participation in the creative powers of the heavenly bodies. The same creative powers which are also latent in the human being, his inner being.

1. The study of esoteric disciplines like alchemy, astrology, magic etc.

2. Poetry that instructs, either in terms of morals or by providing knowledge of philosophy, religion, arts, science, or skills.

3. A complex procedure that allows the construction of talismans. Objects which have the power to embody and manifest celestial-planetary influences.