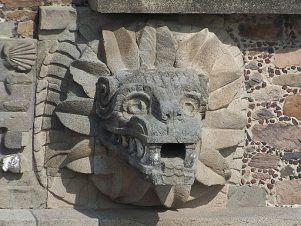 Stories of ancient civilizations appear and evolve in the flow of time. The symbols they contain are multivalent and complex and the pursuit of meaning is never a simple task.

Ancient Mexican legends tell of great cycles of construction and deconstruction of the world. There was a new dawn, a new age was about to begin, but the sun created through divine sacrifice would not move, so the Feathered Serpent took it upon himself to sacrifice the gods to move it. But it was not enough. So, he stood up, mustered all his strength, hurled vast amounts of air into his cavernous chest and blew with all his might on the sun. Then the sun moved and the moon moved, and they took up the path that they still follow to this day.

The new dawn arose, a new age was about to begin, but the earth was uninhabited, so the Feathered Serpent took it upon himself to create humanity to repopulate it. He descended to the dangerous Land of Dead to plead with the Lord of Death for the bones of ancestors. After fulfilling an impossible task, he still could not take the bones, so he stole them and managed to escape the revenge of the underworld god. The Feathered Serpent went to the place of origin where the goddess of motherhood, the Woman Serpent helped him. Thus, from the mixture of the bones of ancestors and the blood of gods, the humans that still live today were born. The Feathered Serpent blessed them with maize, the arts of weaving and mosaic-making, music and dance, the science of curing illness, crafts, knowledge, time, the stars in the heaven, the calendar, prayers and ceremonies.

The Feathered Serpent is found in Mesoamerican culture under many names and in many different stories that have common features. Toltecs and Aztecs and other Nahua peoples knew him as Quetzalcoatl (from the Nahuatl words “quetzal” – “bird” and “coatl” – serpent), the K’iche’ Maya as Q’uq’umatz, the Yucatec Maya as Kukulkan. He appeared in images, statues and carvings from around 100 BCE. From 1200 the Feathered Serpent began to be depicted in human form. Major Mesoamerican cities were organized around shrines that carried the image of the Feathered Serpent. As both bird and serpent he represents the unity and rulership of the celestial over the terrestrial, the ability of the spiritual to elevate the material.

The Quetzalcoatl of the Aztecs is both a creator-god and a ruler-initiate of the sacred city of Tollan. As a god, Quetzalcoatl is associated with fertility and life itself. One aspect of Quetzalcoatl, Ehecatl, is the god of wind, who appears in the breath of living beings and the breezes that bring the life-giving rain clouds. Being one of the four sons of the primeval dual creator god, source of all, Quetzalcoatl is the creator of the cosmos along with his brothers in every new cycle.

The myth usually narrates the story of two brothers, Quetzalcoatl and Tezcatlipoca – the latter associated with conflict and change – who are sometimes antagonists and sometimes allies. They repeatedly fight each other and with each successive battle the world is created and destroyed. Thus, there have been four previous ages of the world, and we are now living in the fifth one. Quetzalcoatl was the Sun in the second age and loved the people dearly.

The Aztec legends also tell the story of the human plumed serpent – the famous ruler of the ancient sacred city of Tollan. His name was Ce Acatl Topiltzin Quetzalcoatl (“One Reed [birth date], Our Prince, the Feathered Serpent”). It is considered that he established himself first as a fierce warrior and then as a priest with profound understanding and strong morality. When he became a ruler, he embodied the function of the creator god at his own level of responsibility and built Tollan to be a centre of civilization. He taught his people science and morality, formulated wise laws and showed how best to work their land. Topiltzin forbade human sacrifice and was appreciated for having constructed wonderful ceremonial structures, including temple pyramids, and for ordering peaceful coexistence.

Topiltzin became the preeminent archetype for priests and rulers. Later, every priest in this region was considered to be an embodiment of Topiltzin.

While everyone was happy with Quetzalcoatl’s reign, his rival Tezcatlipoca was plotting his downfall. He brought many disasters on the people and eventually tricked Topilitzin into a misdeed. Thus, to his great sorrow the ruler was forced into exile. On reaching the gulf coast, Topiltzin immolated himself and rose into the sky as Venus. Other accounts say he boarded a raft of serpents and sailed towards the east, vowing to return again.

Maybe the myth about the return of Topiltzin Quetzalcoatl can be interpreted as the hope and the call for inner spiritual growth of a human being, so that they unite the heavenly and the earthly, become creators of their life, allowing best of their potential to be manifested in this world.