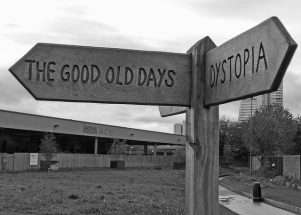 “It was a bright cold day in April, and the clocks were striking thirteen. Winston Smith, his chin muzzled into his breast in an effort to escape the vile wind, slipped quickly through the glass doors of Victory Mansions, though not quickly enough to prevent a swirl of gritty dust from entering along with him.” In this sinister beginning we can recognize the first lines of the well-known novel, 1984, written by George Orwell in 1947-48, just couple of years before his death. Today, it is one of the best-selling books again in the USA, according to the biggest online retail marketer. What makes it so popular again? And with other dystopias, like Brave New World or Fahrenheit 451, why do these novels never go out of fashion?

The word dystopia or anti-utopia comes from the Greek word “kakotopia” (kakós topos), meaning wicked place, because the stories are set in a depressing, gloomy environment, where people are dehumanized and exploited by a tyrannical government – as in 1984, where Big Brother rules with an iron fist and creates a totalitarian world, where war is permanent and people are just cogs in the machinery. On the other hand, in Huxley’s Brave New World those who hold power are less brutal, but more sophisticated. They control the people by making them addicted to a drug called Soma that gives pleasures and satisfaction to people who want to escape from reality: “Was and will make me ill, I take a gramme and only am.”

Although many of the dystopian novels are set in the future, the authors use elements from their existing societies. In Ray Bradbury’s Fahrenheit 451 the writer refers to the late 40s and early 50s in the United States, when many people were accused without proper evidence (see McCarthyism), but readers could easily recall the book burnings in Nazi Germany. Bradbury felt the threat that people might burn books again and he based his story upon this premise.

Dystopian stories are generally pessimistic. Their heroes and heroines rarely win their battle against the oppressor. In most cases, they are broken down and turned into supporters of the regime or helpless figures. Winston Smith, who is tortured and persuaded to confess, betray his lover and admire the anonymous Big Brother, is completely brainwashed and ends up vegetating as an alcoholic.

So, if these novels are so dark and baffling, why do people still read them and seek in them a compass for their lives? The answer, in fact, is very simple: because all the dystopias highlight the defects of societies and show up the worst-case scenarios – like total surveillance, which is becoming a real threat nowadays, when public cameras are watching us on the streets and on our smartphones and computers at home. We upload intimate details of our lives to the internet, but do we care about who will see and use them? In recent years, when populists are rising again and we hear expressions like “alternative facts” in everyday life and politics, who will help us to discern the true from the untrue?

We feel the urgent need to turn to these writings to find answers, because they do provide some. In 1984 the system manipulates people with an artificial language called Newspeak and slogans like “War is peace” or “Freedom is slavery”. What is happening nowadays? The internet, which was developed to connect people, is full of fake news that is generated only to manipulate people’s thoughts and beliefs and divide them from one another. Even general elections could be influenced by disinformation.

Since these dystopias were written, many people have been inspired by them. And it seems they never lose their relevance. The threat of a dark Orwellian society is always on the horizon. But 1984 and its peers will always be there like signals from a lighthouse to remind us of the ways we shouldn’t follow if we want to avoid shipwrecks.