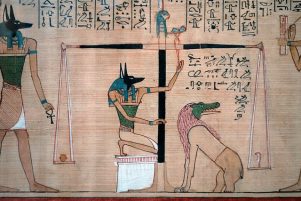 One thing we know for certain is that death is waiting for us all. Something so natural and irrefutable, but still how much do we understand what that really means? How we see death is how we understand life. Searching for those answers is a quest that has accompanied men and women since time immemorial. Most ancient traditions spoke of a journey in life, which would continue after the physical body ceased functioning.

One of the oldest written texts on the subject of death is the so-called Egyptian Book of the Dead. It is not known how old the Book of the Dead is. Many of the papyruses we have today are from the New Kingdom (1540-1075 B.C.E.). But according to tradition priests from the first Dynasties already possessed one of the very old versions of the Book. The Book of the Dead was part of a tradition of funerary texts which includes the earlier Pyramid Texts and Coffin Texts, which were painted onto objects, not papyrus. The Book was placed in the coffin or burial chamber of the deceased.

The Book of the Dead was not called like that when it was written, but it was given the name in 1842 when Karl Richard Lepsius published a translation of a manuscript and coined the name “Book of the Dead”. In the Old Kingdom the Book had a name Pertemhru, “Emerging forth into the Light”. Lepsius also introduced the spell numbering system, which is still in use, identifying 165 different spells.

The text consists of a number of magic spells intended to assist a dead person’s journey through the Duat, or underworld, and into the afterlife.  The intention was not to describe different encounters on the journey, but to offer practical help and magical assistance. At present some 192 spells are known, though no single manuscript contains them all. They served a range of purposes. Some are intended to give the deceased mystical knowledge in the afterlife. Others are incantations to ensure the different elements of the dead person’s being were preserved and reunited, and to give the deceased control over the world around him. Still others protect the deceased from various hostile forces, or guide him through the underworld past various obstacles. Famously, two spells also deal with the judgment of the deceased in the Weighing of the Heart ritual. The central spell is the Judgment of the Dead, with its denial of sin (the Negative Confession).

Every known version of the Book of the Dead contains a different selection of spells in a different order and because of this it seems random, as if there were no internal structure. Some Egyptologists believe that this was due to the choices of the scribes who compiled the book according to their own judgement. But when looking at the core of Egyptian religion and mythology we find the myth of Osiris, who was cut into pieces by his brother Seth, and scattered around Egypt. Osiris’ body was reassembled by his wife and sisters Isis and Nephthys, and finally magically resurrected in spirit.

Somehow this speaks of what is going on in this life. The idea is to bring together different parts of our scattered consciousness, putting them into a meaningful whole. This is the so-called spiritual rebirth, when the old dies and the new man is born, the same life but a different state of being, an alchemy of transmutation.

For this reason the Book with its spells and teachings was not intended only for a deceased, but it belonged to a system of training within initiatic schools. The experience of initiation and death are considered to be very similar.

But leaving this esoteric world to the initiates, what we can learn is the central spell from the Book, the weighing of the heart in the hall of Ma’at, goddess of Justice. If the heart is heavier than the feather of Ma’at, it will be eaten by the beast Amam. This means that the person is going to be incarnated again on Earth with another opportunity to purify the heart with good deeds. Thus, morality becomes indispensable for spiritual progress.

Cultures with such understanding and knowledge represents a peak of human achievement, as their work still resonates thousands of years after they are gone.