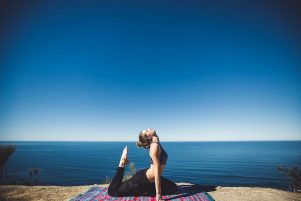 “When the senses are stilled, when the mind is at rest, when the intellect wavers not – then say the wise, is reached the highest stage. This steady control of the senses and mind is defined as Yoga. He who attains it is free from delusion.” – Kathopanishad (1)

All the greatest spiritual teachers have spoken about the need for man to awaken, to pursue a shift of consciousness. Krishna, Buddha, Jesus, Plato all offered a clear, discernible path of spiritual growth towards a more meaningful life, which begins by recognizing and operating from a higher aspect within us, separate from our personality which is controlled by prejudices, fears, subjective emotions and egoistic thoughts. Beyond the religious customs that subsequently developed, these ancient traditions speak of Discipleship; an ardent and persevering path of constant self-development which illuminates man’s potential. Likewise, emerging from the ancient tradition of the Indian sub-continent, Yoga, if understood in entirety, also offers a discipular path leading to self-knowledge, transmutation and truth.

Yoga is one of six orthodox systems of Indian philosophy, collectively called shad darshana, all of which are rooted in the Vedas. Darshana means ‘sight ‘or ‘vision’, and that the Hindu word for philosophy is darshana is telling. It implies that far from being an intellectual pursuit, Indian philosophy is experiential: truth must be witnessed, experienced, and then honored through action. The shad darshana are six ways of approaching Truth, of ‘seeing’ the ultimate reality of unity, yoga laying particular emphasis on meditation and contemplation.

Maharishi Patanjali was the first to compile and codify 196 short, pithy and cryptic aphorisms that make up the Yoga Sutras. Their seeming ambiguity perhaps has a two-fold purpose. On the one hand, it serves as a deliberate invitation to draw a serious aspirant to delve deeper, through his own personal investigation and practice, to unveil the many subtle nuances of the subject. But it is also likely that precise words are acutely limiting in their ability to describe the abstract concepts of the mind’s innermost functioning.  Patanjali’s work, enormously influential in his own time, is perhaps even more relevant today due to the general tendency to think of yoga as just another fitness regime aimed at developing a healthy body, ignoring its far more expansive scope, its far loftier goal, and when practiced correctly, its power to transform our entire way of life.

In Sanskrit the word yoga means ‘to join’, or ‘to unite’, and is a reference to the ultimate goal of the union of the individual soul with the Universal Soul. The Vedas teach that we are all an integral part of an infinite, omniscient consciousness, with all the essence of the divine potential within us.  But our ignorance, fear, and attachments veil this knowledge. The aim of life, therefore, is to lift this veil and self-realize – to re-unite with our true identity. Like countless other discipular traditions, Yoga offers a method, through the cultivation of an ethical life, to bridge the gap between our good intentions and our practical actions. In order to do this the disciple is educated to discipline his instinctive, reactionary personality and change his identification from the external and material, to an eternal, internal, spiritual reality.

“Yoga is the restraining of the fluctuations of the consciousness.” (2)

Patanjali details the fluctuations and oscillations of the mind that disrupt our consciousness, and describes ashtanga yoga (8 limbs of yoga) as the means of fostering restraint. Interestingly, these 8 principles are not rungs of a ladder, or stages that follow one another in succession. BKS Iyengar compares them to the petals of a flower; although each petal contains the essence of the flower, the flower is itself far greater than the sum of its parts.

It is perhaps of value to draw attention to the fact that before any presentation of asanas and pranayama, Patanjali first highlights the need for an ethical code of conduct, the first two limbs of ashtanga: yama and niyama. Together they foster man’s ethical alignment to Nature’s laws, but also guide his personal discipline to tame the desirous lower self so as to perceive reality free of subjective conditioning. Hence, while yama and niyama escort the disciple to transcend his animalistic instincts, asana (Posture), pranayam (Breath Modulation), and pratyahara (Withdrawal of Senses) fosters a healthy body and inner awareness, leading to the stillness of the scattered mind. These are followed by dharana (Concentration), dhyan (Meditation), and samadhi (Super-consciousness, Liberation) which turn the compass inwards as the search for ultimate realization is continually fine-tuned.

Conduct fostering the purity of the Individual

Svadhyaya    Study of scriptures and the self

Together these ten principles are interactive and complementary; following the principles of yama bring about niyama, and practicing the niyama are meant to inculcate the discipline needed to adhere to yama.

becomes effortless and the infinite being within is reached.” (2)

Just as it is important to have a clean and sturdy vessel, in order to carry water, so too is the need for a healthy body as an able receptacle for a sharp consciousness, an imperative aspect of discipular formation.  Yoga offers an intricate system of asana (Posture) and pranayama (Breath Modulation) meant to mould the body and breath into a vehicle to enter the mind.

Asana postures exercise every muscle, organ, nerve and gland in the body, directing consciousness experientially to parts of the body that we are rarely attentive to. It is said, that as the technique improves and the pose is deepened with discipline and attention, a corresponding change in the way the pose ‘feels’ is experienced, not just physically but mentally. Years of meticulous and rigorous practice of adjustment and re-calibration to reach just the right tension is the reason that yoga has the power to dramatically restructure our being. It is why asanas are not mere gymnastics, and when applied in the same measure to all the limbs of ashtanga, why pranayama rises beyond deep breathing, dharana is not just a technique, and yama and niyama remain not aspirational theoretical constructs but become deeply transformative experiences.

“Pranayama removes the veil covering the light of Knowledge.” (2)

Prana is the energizing principle that vitalizes the gross body, indeed all of life. Ayama means extension and expansion. Similar to asanas for the physical body, pranayama enables regulation of the energetic body through control of the breath. The direct causal connection between our breathing and our mental state is well documented. Exciting the emotions desires, cravings and aversions heighten the rate of respiration, whereas deliberately controlling the breath serves to help keep the mind centered and amplified emotions at bay.

“Practice [abhyas] and freedom from desires [vairagya] are the

means to still the movements of consciousness.” (2)

Patanjali says that yoga rests on the 2 pillars of disciplined practice and detachment, both of which must go hand in hand. The first four principles of ashtanga (yama, niyama, asana, pranayama) emphasize abhyas, defined as assiduous, zealous, persevering practice. The other four principles (pratyahara, dharana, dhyana, samadhi) emphasize vairagya, detachment or renunciation. Abhyas is a positive, expansive, generative energy causing an outward centrifugal force. However, emphasis on external practice alone poses the danger that the mind, ego, and senses will run astray, and turn outward towards the material world. The practitioner might easily get caught up in the doing, rather than the being. Hence, vairagya, or renunciation, is imperative, which corresponding to an inward, centripetal force –  an equal and opposite force applied to protect the practitioner, turns him inward, fostering independence from sensory stimulation.

What then must a disciple renounce? It is noteworthy that the yogis of ancient India were not expected to renounce the world. On the contrary, they were an essential and integral part of society, often guiding the governance of the state. Isolation or severance of external ties alone cannot suffice, because if this were so, then prisoners undergoing deprivation in solitary confinement would be ‘evolved’ upon their release. Renunciation implies a positive disengagement of one who uses his will to do the internal work necessary to be able to discriminate between that which is transitory and that which is immutable. The opportunity of our times therefore, lies not in running off to the mountains or jungles, so often disguised or misunderstood as renunciation. Our world today needs idealists to effect change, modern yogis if you will, who can lead humanity, escorting it one step closer towards evolution. However, it is only possible to lead others, if one is able to lead oneself. Renunciation in this context is the discriminative discernment, the detachment that allows one to be free from the allure of transitory worldly pleasure, without isolation from the world. This is renunciation, not of the action itself, but of the attraction to the fruits of the action.

“Tapas (self-discipline) burns away impurities and kindles the sparks of divinity.” (2)

In the Yoga Sutras, tapas is variously translated as austerity, self-discipline, and fervor. Tapas can be understood as a sort of purifying fire that burns away preconceptions, antipathy, and doubts, leaving clarity to grasp the Truth. It is the double-sided axe so often alluded to in discipular traditions that can be used to strengthen our morality, build conviction, and commitment. The aspiring disciple purifies himself by facing his limitations, and dares to push the boundaries of his material, emotional, and mental comforts.  The crucial role of tapas is brought out by BKS Iyengar in a remarkable commentary: “Ahimsa (non-violence) cannot properly be understood without reference to tapas. Tapas is the inner himsa (violence) by which we create the possibility of outer ahimsa. Ahmisa cannot exist alone. Mahatma Gandhi would never have been able to summon up the implacable peacefulness which moved an empire, without his ruthless attitude towards his own self. Violence is perhaps too strong a word for tapas, but it is a burning zeal and austerity, an unflagging hardness of attitude towards oneself, which makes possible compassion and forgiveness towards others.” (2)

The Yoga Sutras of Patanjali are a treasure of the human heritage – an invaluable documentation of one of the many discipular traditions developed by ancient wisdom to help Man discover and reveal his potential, elevate his consciousness, and illuminate his ability to interact with Truth. Just as Krishna’s discourse to Arjuna allowed him to plainly recognize his righteous duty and the path he must take, Patanjali’s seminal work speaks to us in a secular language, giving us practical tools to navigate our lives in accordance with universal truths, by opening up a spiritual doorway through which we might access the subtleties of our inscrutable minds.

“Yoga is an art, a science, a philosophy. It touches the life of every man at every level – physical, mental, spiritual – and it is a practical method for making ones life purposeful, useful and noble.” (2)