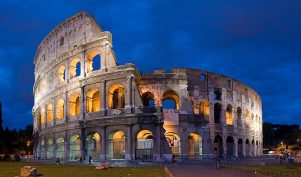 Concrete is a compound composed of cement, water, sand and/or gravel, and it can also be reinforced with steel rods arranged in a mesh within the concrete slab or column. Our modern civilization is known for its abundant use of concrete, so abundant that there is an actual shortage of sand worldwide, which is also due to artificial island building. We use concrete because it’s a solid, easy, cheap and quick material to build with. But it is costly for the environment as the production of cement generates a lot of CO2. But the real problem of our modern concrete lies in its durability. By nature but also by design, modern concrete isn’t meant to last. A good quality concrete with proper steel reinforcement can last over a hundred years with little maintenance before the bonds of the compound start to loosen. That’s pretty good, but it is still nothing compared to ancient Roman or Egyptian concrete and cements.

Romans were known for their quality buildings using large stones and lots of concrete. For example, the foundations of the Coliseum, which has been standing for almost 2000 years, are made of hundreds of tons of concrete. But Roman concrete structures have not only stood the test of time, they have even strengthened over the centuries, especially when they have been in contact with sea water. Scientists have finally determined the element within the concrete which make it so resistant, it is the volcanic ash and certain minerals it contains, which react with sea water and strengthen the bonds of the compound.

However, if 2000 years is impressive it is still little compared to the 4,500-year-old concrete found in Egypt. Some of the stones in the pyramids of Giza were bound with a silicon dioxide-based concrete and some of the stones themselves seem to have been artificially created using a geopolymer compound. Professor Joseph Davidovits and later Professor Michel Barsoum studied the theory and came back with some compelling evidence that the ancient Egyptians used specific types of concrete to build, at least partially, the pyramids of Giza.

This shows that two of the greatest civilizations of antiquity built and designed their monuments to last thousands of years. It demonstrates that both Romans and ancient Egyptians were building civilizations for the future, that would last and show their greatness for many, many generations to come.

But when we look at our own civilization, with all its might and technology, it does not seem to be concerned to leave a trace for the future generations, at least a positive one… It might be time to look more closely at our mistakes and our legacy, knowing that humanity has accomplished and can still accomplish great things. We should probably also consider that the strongest foundations are not always made of concrete, but of moral, ethical and philosophical principles.