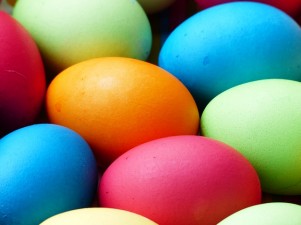 The egg is a universal and self-explanatory symbol because it holds the seed from which the whole of manifestation will spring. The idea that the universe was born from an egg is shared by nearly all ancient civilisations and cultures. The primordial man also originates from an egg, like Prajâpati. In general, the cosmic Egg, born from primordial Waters, splits into two halves to give birth to Heaven and Earth – as the Hindu Brahmânda or the two Dioscuri. It also signifies the polarization of the Hermaphrodite. The egg is a primordial reality containing the seeds that will give rise to multiple beings. For the ancient Egyptians, beings in multiplicity emerged, by the action of a Demiurge, from the Nun, personification of the primordial Ocean. A god sprang from this egg to bring order to Chaos, and in this way gave birth to differentiated beings. The god Khnum, born from the Ocean and the primordial Egg, in his turn, produces eggs or seeds of life. Ancient Egypt had various cosmogonies and in Hermopolis it was believed that the primordial Egg was Qerehet, guardian of the life forces of the human race. In India, according to the Upanishads, the Egg springs from the Non-Being and gives birth to the Elements: the two halves of the shell, one of gold and the other of silver, become, respectively, Heaven and Earth. The outer membrane gives birth to the mountains; the inner one becomes clouds; the veins give rise to the rivers and the ocean stems from the liquid. According to Tibetan tradition, the egg is the origin of a long genealogy of ancestors. In Chinese tradition, before Heaven and Earth became separated, Chaos resembled a hen’s egg. After 18.000 years – a number reflecting a long, undetermined length of time – the egg broke open; the heavy elements formed the Earth (Yin) and the light ones became the Heavens (Yang). The Coricancha, the great Inca temple at Cuzco, had as its main ornament an oval gold plate, flanked by representations of the Sun and Moon, symbolizing Huiracocha, the supreme godhead. The egg represents the creative power of Light. It confirms the promise of resurrection as a return. In graves in Beotia, figures of Dionysus holding an egg in his hand have been found. Orphic tradition prohibited the eating of eggs. Eggs were offered to the dead as food and token of rebirth. The egg is also linked to the symbolic qualities of quietude like the home, the nest, the shell or the mother’s womb. The egg is also associated with the idea of the seed of spiritual life, by the alchemical tradition of the Philosopher’s Egg, a hermetically sealed flask containing matter proper to terrestrial work.