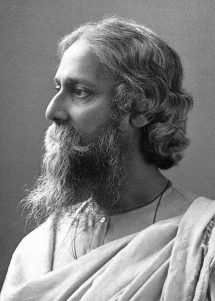 As a poet, musician, writer, artist and educationist, Nobel Laureate Rabindranath Tagore was a visionary polymath. His verses, stories and songs are simple and personal, yet elegant and profound. His lyrical style was capable of focusing a magnifying glass to capture nature’s minutest details, while also throwing a searchlight across the heavens to encompass vast, magnificent, star-studded galaxies. His songs gave a voice to everyman, their many layered meanings unfurling to the attentive.

To explore his philosophical legacy with the Culture Circle, New Acropolis Cultural Organization hosted Ms. Vandana Hazra, Bharatanatyam Dancer, Lecturer, and Writer. Vandana is a faculty member at Rabindra Bharati University, as well as at Visva Bharati University, Shantiniketan. Her interest in the poetry and vision of Tagore fetched her a fellowship from the Department Of Culture (Government of India) to research “Classical Dance and the Relevance Of Tagore”. Through a multimedia presentation that included dance, poetry and song, Vandana shared her insight into the mystical wisdom of Tagore’s genius. This article combines glimpses of Vandana’s insights with my own investigation of Tagore, highlighting but a few principles I deemed philosophically important.

“The man whose acquaintance with the world does not lead him deeper than science leads him, will never understand what it is that the man with the spiritual vision finds in these natural phenomena.” – Tagore (1)

It is evident that Tagore believed that an education divorced from life was useless and that the highest education was that which aligned man to the natural harmony of Life, and promoted creative self-expression. He believed that nature in her bountiful generosity and compassion was the best teacher. Therefore, says Vandana, “the school he envisioned was under the open sky with children sitting under the trees.”

“Truth is silent and it is imagination only which waxes eloquent. Reality represses the flow of feeling like a rock; imagination cuts out a path for itself.” – Tagore (2)

“Tagore felt imagination helped raise the level of one’s consciousness from the mere physicality of life,” says Vandana, suggesting that for Tagore, imagination was a tool to grant children the freedom to take off from the material realm, and enter another world that is “more than true”, beyond the limitations of duality of the true and the false.

Tagore believed that children must be allowed to develop and give full rein to this faculty. To this end he incorporated stories, songs, dance, drama, music and art, as essential elements to feed this growth, to begin to sense the intangible, the non-material, and the metaphysical.

Quoting Tagore, Vandana translates, “When I realize I have been invited to this banquet of celebration that is life, where the stars and galaxies move in tandem, where life and death dances in rhythm, I realize that I am an indivisible part of this. Therefore, I am precious, and therefore I rejoice.”

This sense of ‘preciousness’, Tagore emphasized, must be realized and celebrated early in life; the recognition of one’s value, meaning and purpose, to contribute to the majesty of existence. It is what gives one the strength to live joyously, or in Tagore’s words, “to live life to the brim,” rather than to merely survive.

“Let me not pray to be sheltered from dangers, but to be fearless in facing them.” – Tagore (2)

Further, Tagore was not trying to save us from the experience of pain or sorrow. Rather his mystic poems tell us that we are capable of rising above our anguish and see it as part of the cycle of life. If we attune and integrate ourselves with the turning of the tides and seasons, as we sway to the music and harmony of nature’s grand design, we learn that we too are an interconnected part of its magnificent, cyclical rhythm.

“Sin is not one mere action, but it is an attitude of life which takes for granted that our goal is finite, that our self is the ultimate truth, and that we are not all essentially one but exist each for his own separate individual existence.” – Tagore (1)

Tagore was religious in a unique manner, continues Vandana, “he was trying to find a way of embracing, not only mankind, but the entire universe.” To this end he moved away from rituals that differentiated, and sought an inclusive practice that could unite all. He comingled ideas from the Upanishads, the Gita, Brahmo Samaj, Buddhist texts, Christianity and modern Western thought. Tagore believed that the highest aim that man can aspire to is the union with the Supreme Reality, and this was the recurring narrative in Tagore’s philosophical and poetic cannon. He believed that God cannot be comprehended by reason and logic; its reality has to be realized through experience and intuition.

“The same stream of life that runs through my veins night and day runs through the world and dances in rhythmic measures. It is the same life that shoots in joy through the dust of the earth in numberless blades of grass and breaks into tumultuous waves of leaves and flowers. I feel my limbs are made glorious by the touch of this world of life. And my pride is from the life-throb of ages dancing in my blood this moment.” – Tagore (3)

“Tagore recognized 3 approaches to universality”, Vandana further explains. “One was through man’s faculty of REASON: The laws of nature are governed by reason, which the human mind is capable of understanding. Therefore, even though not all laws of nature have been discovered as yet, man is confident that through reason he can understand and become one with nature. But just like the world lends itself to be understood by reason, so also can the universe be grasped through LOVE: We must analyze by breaking things apart but, but when we put things together, that is love, a natural force of attraction. And finally, there is UNION: Tagore believed that it is the sense of oneness with the universe that establishes in man the sense of preciousness of the life he has been born to.

“How can we overlook cultivating the sense of beauty if we wish to have a complete man.” – Tagore (4)

As an aesthete, and a master of many artistic traditions, Rabindranath Tagore was particularly sensitive to beauty. Adds Vandana, “Satyam – Shivam – Sundaram (Truth – Godliness – Beauty) is a familiar phrase that comes to us from Traditional Indian Wisdom. Truth is a philosophical concept, while Beauty an aesthetic concept. The appeal of the arts is not to the brain. It is through the senses that we assimilate Beauty. Tagore enumerated all the senses through which nature is trying to touch you and call you to herself. She lures you through your sensibilities in an effort to bring you close enough, to reveal her secrets, her truth. Tagore believed that Truth manifests itself in Beauty, and Beauty was a gateway to Truth.”

Tagore received the Nobel prize for literature in 1913, and was knighted by King George V in 1915. However, he renounced his knighthood 4 years later, in a letter to the British Viceroy of India, protesting the inhumanity of the Jallianwala Bagh massacre: “The disproportionate severity of the punishments inflicted upon the unfortunate people and the methods of carrying them out, we are convinced, are without parallel in the history of civilized governments…The time has come when badges of honor make our shame glaring in their incongruous context of humiliation, and I for my part wish to stand, shorn of all special distinctions, by the side of my countrymen.” (5)

Though contemporaries, embroiled in the needs of their times and their countrymen, no two persons could differ so greatly as Gandhi and Tagore – the frugal, frail ascetic, and the aristocratic poet in his flowing robes and beard. While both were publicly adored for their principles and belief-systems, and both brought recognition and admiration to India on the world stage, contributing to their country through dedication, sacrifice and personal example, they disagreed vehemently on many things.

“Swaraj is not a matter of mere self-sufficiency in the production of cloths. Its real place is within us, the mind with its diverse power goes on building swaraj for itself.” – Tagore (6)

Even though they debated ceaselessly, writing essays contradicting each other, their close friendship remained unbroken. Vandana explains, “Their mutual respect and reverence for each other had Gandhi give Tagore the title of Gurudev, (Divine Teacher), while it was Tagore who first called Gandhi the Mahatma (Great Soul), when he was arrested in the aftermath of the Jallianwala Bagh Massacre.”

“Patriotism cannot be our final spiritual shelter; my refuge is humanity. I will not buy glass for the price of diamonds, and I will never allow patriotism to triumph over humanity as long as I live.” – Tagore (5)

Poles apart in everything but in spirit, Gandhi and Tagore influenced India very differently. Says Vandana, “Gandhi was not engaged with the currency of Beauty. His coin was the lessons to be learnt from purification, of discipline, hardship, fasting. He was preoccupied by the atrocities inflicted on his countrymen, and compelled to become a leader that roused a country to action. Tagore was a man of thought, a creator of forms, of paintings, music, stories, and his focus was freedom of the self. Though their completely different temperaments and sensibilities took them down different paths, both were united in their passion for seeking Truth. Each was trying to kindle a different light, as ‘Truth called them differently’.”

Vandana concludes, “Tagore was a great human being, modern, inclusive, accessible, and available to all of us. He astutely culled out the best from our ancient heritage, took what was pertinent and understandable and left out what could have been open to dangerous misinterpretation. Our scriptures and religious texts are important not necessarily for the answers they give us, but for the questions they raise. Every age has to hold these questions, and it is up to the people of different times to attempt to answer them according to their understanding of life at that point in time.”

This then was Tagore’s gift to us. It seems that he was convinced that life provides us with many opportunities to open up and expand into larger spaces of consciousness. But sometimes the veils we carry inhibit us from recognizing and utilizing these moments. His legacy is a prolific body of work to sensitize us to these moments, in the hope that it would act as an impetus to take us one step forward in the evolution of our consciousness.