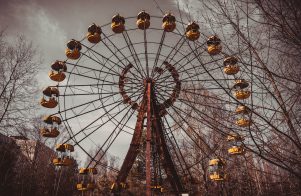 Three things cannot be long hidden: the sun, the moon, and the truth.

The 2019 HBO miniseries Chernobyl portrays its version of the events that led to the 1986 nuclear meltdown and its aftermath. While doing so, it presents a bleak rumination about the nature of truth and the consequences of ignoring the laws of nature. In this story, fear and greed – the eternal enemies of mankind – join hands to bring a cataclysmic disaster of unbelievable proportions, causing immense suffering and almost resulting in the destruction and inhabitability of an immense swath of planet Earth.

The series takes place in the late Soviet empire. Grey, godless, authoritative. Government is a hierarchy based on fearful obedience and greedy ambition. Everyone has their place in the hierarchy; everyone wants to be promoted; no one wants to speak freely or to admit one’s mistakes. One is constantly followed and watched by the dreaded agents of the KGB.

In this atmosphere, something terrible happens. A cancer is spreading. But nobody wants to admit it or to take responsibility. Everyone is afraid to lose their position, or worse. Reality, however, doesn’t care whether we accept it or not, and even if a million blind men deny it, it will continue to be. And so, this cancer keeps spreading, eating away at the innocents.

Fortunately, always juxtaposed with ignorance are those who dedicate themselves to truth. They are the leaders, scientists, mystics and artists, who aspire to live truthfully at all costs, and against all social rigidity and intellectual blindness. And it is because of them that humanity still has hope.

In Chernobyl, it is scientists who channel the voice of truth. Oblivious to the games of politicians, they look at things as they are, and act to restore the balance of nature. If the story as told by HBO is correct in its details, then It is not an exaggeration to say that humanity owes them a great debt.

Humanity, unfortunately, inclines to act against the laws of nature. Again and again history shows us how individuals and societies transgress the laws of nature, ignoring reality in order to achieve certain goals which seem valuable at the time.

Perhaps we think a better life is possible outside the boundaries set to us by nature.

Perhaps we are afflicted by what the Greeks called Hybris -the pride that leads human beings to challenge the gods.

It clearly disregards any logical observation of the natural world. Where nature knows no waste because everything is put into use, planned obsolescence relies on waste, and the amount of artificial junk we create by manufacturing unnecessary things is literally unimaginable. Yet, we continue in the belief that this way of life will have positive results in the long term.

The same goes for individuals who try to live a life that is not their own because of the external demands of society. They ignore their own nature, thinking it’s something to repress.

To live in the world means to recognize we are part of it.

All the dimensions of our existence function according to laws, in a framework we today call Nature. On the individual level, our bodies, our emotions, our thoughts, all act according to certain rules, and by knowing and obeying these rules we collaborate with nature. Moreover, on the social level, we may ask whether the movements of history are random, or whether they too obey certain unknown laws, and whether they reflect our relationship with ourselves and with reality as well.

Living against truth is not a good bet, and it will never have good results in the long-term.

But how do we find truth?

The truth is always there, it is up to us to elevate ourselves towards it.