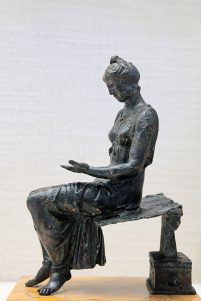 The history of education has also been described as the the history of civilisation. Education has a role in perpetuating and passing on knowledge and values to the next generation. Therefore, it has a culturally specific connection -“enculturation” as defined by the cultural historian C. Dawson.

The education systems of the world are the product of centuries of changes through successive stages of transformation to the present systems.

The story of formal education in the Western world begins with its roots in Ancient Greece based around the written word after the introduction of the alphabet.

The word education has its roots in Latin, ex – meaning “out of” and ducere meaning “to lead”, “to lead out of or guide out of”. Latin ‘educare’ in essence would mean “to bring up or rear a child”.

Education in Ancient Greece, in the city of Athens during the 5th to 4th centuries B.C. was aimed mainly at preparing young elite men for public life and taking part in the democratic process. It was still for the privileged, as only families wealthy enough could pay tuition fees to a private tutor. Students from citizen families could receive a basic education preparing them for citizenship, including oratory and ethics. Only male Athenian citizens were allowed to participate in the democracy, while slaves, foreigners, or women were not.

Other Greek states such as Sparta, on the other hand, had a publicly funded education with its main focus on the martial arts, rather than academic subjects. In Athens, if you wanted a physical, academic and arts education, these were covered in different schools: the paedotribes covered gymnastics and general physical education, the kitharistes (named after the kithara or lyre) covered music and lyric poetry, and the grammatistes taught reading, writing, and arithmetic, as well as literature.

Chaperoning these young boys to and from school, was a slave known as a paidagogos, meaning literally “child leading”. From this are derived the words pedagogue and pedagogy, even though the slave didn’t actually do any teaching.

After a basic education they could go on to study higher education in the practical arts (such as medicine or architecture) or in philosophy. This is where famous philosophers such as  Plato, and Aristotle had their own schools. Plato’s school was named after Akademos the Athenian hero, and later known as Academia, from where we get the word academic.

In Rome they continued in the same line as the Greeks, with a strong emphasis on rhetoric and oratory, which were necessary skills for taking part in Roman public life in their Republican system. Sadly, physical education and music dropped out of the main curriculum. But one of the notable differences was that women were given a basic education.

It was during this period that liberal arts education took place. In Latin liberalis meant “free”, so a liberal education was an education for the freeborn people. The notion of free is connected to the word school itself, as in Greek skhole means “leisure”. Not that school was a leisurely pursuit, but for one to go to school one had to have leisure time outside work.

Education in Rome was divided into three levels. In level 1, boys and girls from about 7 to 11 years of age were taught by ludi magiste, the “schoolmaster”, and covered the basics of reading, writing and arithmetic. At Level 2, students aged 12 to 15 would be taught grammar and literature by a grammaticus. And the final Level 3 was accessible for boys over 16 who could move on to the rhetor to learn rhetoric – girls were not permitted as there was no opportunity for public speaking.

We have many educational words that come from Greek and Latin and some from Germanic roots.

The word teach, comes from Old English tæcan and ultimately from the Proto-Indo-European root *deik- which means to show. This is also the root of the word dictionary, the Latin word dictionarius being coined in the 13th century by an Englishman, John of Garland, who taught in Paris, and wanted to create a resource to help his students learn Latin vocabulary.

Often in teaching, the teacher “shows” how to do the “work”. Work, an integral part of the pursuit of study, is etymologically connected to the word student, meaning to be eager, to take pains, to strive after, from the Latin ‘studere’.

Teaching is not without care and nurture, as we see in the word ‘tutor’, which developed into its educational sense, and comes from Latin ‘tueri’, meaning “to protect”.

Pupil is another word for student, and is the diminutive form of pupus “boy” and pupa “girl” in Latin. In Latin pupilla could also be used to mean “doll”, from which we get pupil in the sense of the dark aperture in the eye, because if you look in someone’s eye you can sometimes see a little doll-like version of yourself reflected.

During the renaissance, ancient culture was rediscovered and referred to as the classical, implying it was better than the mediaeval period that followed. And all the ancient texts were readopted and copied, leading to the 18th Century, which is referred to as the Neoclassical period.

The notion of a classical education referred to education in the culture of the classical world, rather than an attempt to repeat or replicate education from the ancient world. The emphasis is more on the Greek model, with less focus on the theological education of the mediaeval period. Education of the early modern period involved classical languages like Latin and Greek, as well as the natural sciences.

In the mediaeval period, education was largely conducted by the church. Students could attend a monastic or cathedral school in order to become a member of the clergy or to become a scribe. As the values of society shifted, so too did the emphasis of education.

Greek and Roman education, on the other hand, emphasized preparation for public life and citizenship. Medieval education focused on the next life after death. Physical exercise was out, and textual study was definitely in. Students were taught reading and writing in Latin, not their own native language, and they would spend their time copying church writings.

However, the basic subjects still came out of the ancient period in the form of the seven liberal arts, first codified in the 5th century by Martianus Capella, growing out of the ‘enkuklios paideia’ – “the circle of arts and sciences considered by the Greeks as essential to a liberal education” (Oxford English Dictionary).

The seven liberal arts were made up of the trivium (grammar, rhetoric, and logic) and quadrivium (arithmetic, geometry, music, and astronomy).

Our most well known and most prestigious establishments of education, the universities, were born out of the middle ages, as a result of the demand for education outside of the cathedral schools.

In the 18th and 19th centuries Frederick the Great of Prussia, during the Napoleonic wars, outlined the Prussian model of education in the Generallandschulreglement, a decree of 1763, authored by Johann Julius Hecker. This model is more popularly known as the Factory model of education, where students are educated by age. Its conception was seen as modern and novel at the time with egalitarian views of education for the masses.

This age-based cohort model of education still remains the basis for our modern-day education system around the world.