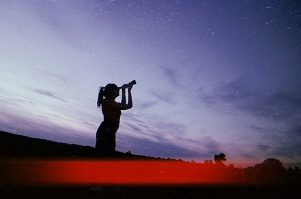 This article has not been written as a treatise about Astronomy neither about Philosophy. This is only an effort to show how the study of  the planetary system can be related with human life.

Astronomy is one of the oldest sciences. Mankind, since he acquired consciousness, realized that there is a world of changes, sensations, colours, movement, smell, tastes, sounds, and this world is inserted in something bigger. We also know that Prehistoric cultures left behind astronomical artifacts such as the ancient Egyptian and Nubian monuments. Early civilizations such as the Babylonians, Greeks, Chinese, Indians, Iranians, Mayan, performed methodical observations of the night sky. And any human being in any part of the world observes the sky and it’s phenomena.

Astronomy can give us a perspective of life… and a perspective on reality, found in no other study. It makes us embrace the vast universe that we are part of. Yes, because human beings, even when they are not aware are still part of the wondrous universe. And Astronomy can make us embrace it and love this embracing.

If we want to discover all of the possibility that this knowledge can give us, we can start taking a kind of journey through the path of the solar system, and, even if we are sure that we understand how it works, let´s feel enthusiasm for each perception.

Most of the astronomers agree that the solar system is a complex where the sun is the center and it is surrounded by seven planets and two dwarf planets. And these sky bodies have several movements. Two are the most important and are called rotation (when they are spinning around their own axis ) and revolution, that means their path around the Sun. This “walking” around the sun describes a kind of orbit that means the year of the planet. Of course, according to the distance of the Sun, each planet takes a different time to fulfil this orbit. So, the nearest planet, Mercury, takes 58 earth days to complete  its orbit, while Pluto, one of the dwarf planets (the other one Uranus),  takes more than 90,000 earth days to go over its path around the Sun.

Now, knowing this short particularity of the solar system, we can drive our earth to a journey through this path. The journey will be the orbit described around the sun, or our sun…Because it´s not the brightest star in the universe. There are seven other stars that would appear brighter in our neighbouring sky. The sun is just one of the stars on the edge of the Milky Way galaxy, that contains by some estimates, about 400 billion stars. We cannot imagine what is the brightness of 400 billion of stars, many like our sun. But a galaxy is this… And this mean that for going over to visit a whole galaxy and spending just few seconds in each star, a  visitor can spend 12,675 years. Or better saying, if we take as example an 86 year old person and consider this as a time of one generation, we will see that this 12,675 years requires 147 generations of travellers, doing nothing but visiting one star per second, every time, every day of each of their lives. This means that our part of the universe is so vast!

And the earth is just a tiny blue marble floating in the blackness of this space… We are a grain of sand on the shores of the cosmic ocean.

And, even if we are used to feeling of ourselves as the apex of creation, we can admit that if billions of suns are required to produce light of a single galaxy, then there is possibility of existing abundant life with perhaps, civilizations living in our other galaxies.

The conscience of this smallness and the contemplation of the infinitude of the universe, makes the human being ask the fundamental questions of the life: Who am I? How am I? What am I doing here? What am i here for? And the most important: From where comes this reality that I can see? The last question is related with the origin of the world and of man, and it’s, perhaps, the most polemic question of the history of the philosophy, because it makes us think about a Superior Being who created everything. Here we can see a very close relation between astronomy and philosophy. Even if the method of searching the wisdom is different, there is a necessity of finding the answer for these questions.

The astronomer can also be a philosopher. For this, it is necessary to be a searcher of the knowledge and wisdom and  to see natural phenomena with the eyes of the soul. So, all the observations and perceptions can contribute to this self knowledge.

The journey of the earth around our sun, as we know, is not the only phenomena in this vast space. The known planets and many other bodies also have their journey and there is an incredible coordination in these happenings. Maybe we’ve never thought about this: that planets and sky bodies move themselves as if there was a dance in the universe. The study of the astronomy can give us tools for this understanding.

To see the wonders of the universe with the eyes of the soul requires a change of our perspective of the reality; to develop the constancy, the strength of the sun and the coordination, the order and also constancy of the planetary system, should be the goal of all mankind, as integrant of the Nature.  This is what philosophy does: through self knowledge, which turns in self control, philosophy can give us tools to develop  order, strength, constancy…