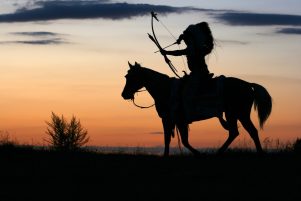 “We Sioux spend a lot of time thinking about everyday things, which in our mind are mixed up with the spiritual. We see in the world around us many symbols that teach us the meaning of life.” – So claimed Lame Deer, who was known as John Fire and lived in the 20th century. He was born in 1903 as the son of Sally Red Blanket and Let-Them-Have-Enough in an American Indian family, and became a shaman when he was 16.

But his life as a young man wasn’t a success. He had to attend a state school that aimed to assimilate young Indians. He didn’t like the school at all, because the teachers tried to convert their pupils to Christianity and forced new, modern customs on the indigenous people. After leaving school he chose to be a vagabond, a hippy. He was a good rider and travelled throughout the States working as a rodeo clown. According to his personal account, he drank a lot, gambled, womanized and was even involved in theft. He married a Christian woman, but divorced 3 years later. He was constantly searching for who he actually was and tried everything. He experimented with peyote and he became an addict for six years, but then he realized that real visions are different from those produced by hallucinogens. He saw how fake the world of modern man is. When Americans exploit and destroy lands and animals, they don’t become happier, just lonely and fat. He said that while ”Indians are hunting for visions, white men are hunting for dollars.”

At the age of 39, he decided to become a full-time Indian. He decided to get back to his roots and continue the traditions of his ancestors. He often participated in different American Indian Movement events, including sit-ins at the Black Hills. This territory was owned by Indians until gold was discovered on its fields, and then the government seized it. Lame Deer became an activist supporting Indians’ rights to their land, their traditional lifestyle and Lakota ceremonies.

His life and thoughts were described in a book edited by Richard Erdoes. In it, he spoke of the importance of the symbols that are common to all mankind. Those who could read the signs could understand the messages of Nature, because stones, leaves, numbers and many other things leave messages. For the Indians the number four is the most sacred number. It stands for the four elements, the four cardinal points, but as well, the four virtues: bravery, generosity, perseverance and wisdom. Words are also symbols, as well as names. They give power and they tell a story about the users. Every person has an everyday name, and another sacred name which is given to him by a shaman at birth. It is forbidden to utter this sacred name in everyday situations.

Lame Deer emphasized the importance of the connection with Nature and claimed that the modern lifestyle and cities were making it impossible to keep that link, they are creating a man-made world, a prison. There are no tastes, no smells in this artificial life, it is sterile, and everything has lost its sacred side. But by cutting themselves off from nature, people have become lonely and afraid of death. When somebody dies, the American Indians believe that his or her spirit travels from north to south along the Milky Way, until reaching the Empire of the Spirits. In the well-known Sun Dance, which is a sacred offering to the Great Spirit, the tree stands for the Milky Way.

For the Lakota Indians, the world is sacred and man is an organic part of it. In one of his last teachings, Lame Deer said that modern people should be saved from themselves before they destroy everything. And this would happen only if everyone changes the way they think and realizes that we all depend on the Earth on which we live. If we hurt any part of it, that means we hurt ourselves. The biggest enemy is within, he said, but it can be defeated.