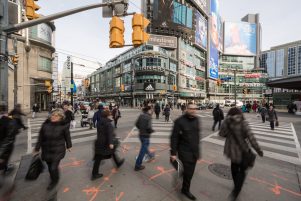 Are we living at a turning point in history? Probably many people have said this to themselves (while looking at the first bicycle, binoculars or the first field canon). Many of us who have explored world history, are certain that our era is not like the previous centuries, when people have changed attributes, characteristics, emphasis in the system of values…. Today we see a change not only in the essence of our viewpoint and values, but also in the main principles through which we grasp and interpret the world. What are the turning changes?

A WORLD LIKE A VILLAGE – today’s man can witness the entire world – travelling physically and virtually, being in contact with anyone from anywhere. This seems new. Yes, it does have its downsides (non stop invasions of tourists in each interesting place), but there are also great chances for men to leave their provincial or small neighbourhood type of thinking and to become more enriched, more tolerant. Can we achieve that?

FIXING NATURE – We are probably the first in history to attempt a “correction” in the natural principles of nature (the male and female principles which are in the roots of the biological, psychological and social existence). Will that become a dominant matrix? And if so, how will Nature react?

PUBLIC LIFE. The boundary between the personal and the public is almost non-existent. That was previously the case only in e.g. prisons and submarines. At any moment anything you do can be recorded, almost everything you do and say can become worldly presented with the speed of light. Privacy becomes a public royalty. Where will we draw the line?

ALMOST PERFECT MANUFACTURING. Technology is so advanced that we now have difficulties distinguishing between a copy and an original. For better or worse, from paintings to money, to a human voice and a face in a video… anything can be falsified without us being able to recognise it! It seems we have a long thinking exercise ahead: about what we can trust, and what not. The wise men say that the material world is an illusion… then what should we call this part of it? Illusory illusion?

“THE LONELY CROWD”. Technology has connected us with unreachable places and people. And at the same time it allows people full lack of socialisation. I will leave aside people living in video games and focus on the fully “remote” way of living, in which practically all needs can be satisfied “online”, while living alone in the centre of a huge agglomeration. The plans for “Meta-life” of the modern “visionaries” turn the image of the movie “The Matrix” into something very real. Will the Meta-happiness be real?

THE KINGDOM OF INFORMATION. Never in the history of the world has the human being had access to such a vast amount of information. A reasonable man with self-discipline is delighted. He can use the incredibly rich pool of sources of knowledge for his development and for exploring the world.

At the same time though, the number of functionally illiterate children in Bulgaria has reached 46% (ones that regardless of the type of information, cannot distinguish, comprehend or utilise it). So why would they even need all that information?

Let’s add to the mix the Internet, this incredible tool that magnifies the good and the evil, which has contributed with its fair share: Almost full undermining of the natural authority (the opinion of the popular YouTube personality surpasses that of the Nobel prize winner because the “likes” have surpassed any other criteria).

Beyond making jokes: to find valuable and valid information has become as difficult as it was at the time of totalitarian regimes (that some of us remember). An interesting paradox!

THE OBSERVER UNDER OBSERVATION. Nowadays we can observe and control our pulse, number of steps, automatic purchases… like never before. And at the same time, we are being watched. The control over every aspect of the human life has become unprecedented and all that – “in real time”. The amount of information gathered not only for the movement of each individual but also for their condition, their health, their tastes, opinions, habits, is truly astounding, and is not by chance that it is the single most valuable item on the world market at the moment. Forget about the oil and the diamonds. For now, it looks like it’s not a big deal, that we are just guided by the data collectors to particular purchases, entertainments, behavioural reactions, preferences, votes…. Wait did I type “just”?

SMART HANDS. How can we miss technology itself, but let’s tie it to the development of man himself. We will probably be remembered as “the ones who conducted heart transplants and landed on the Moon” – this is also unprecedented! But is it possible there could be a reasonable boundary, where we can tell ourselves – more is no longer desirable? To put it in a more precise perspective – what has happened to human imagination, since watching movies has become prevalent over reading books? In what shape is our memory since we are able to record and photograph anything with our phone? What is the status of our health since everyone started using elevators and cars?

What would we want to develop? What will be on the pedestal? The internal instruments of man himself, his conscience, concentration, memory, will, imagination and moral values? Or the external instruments that will replace them? Is it a good idea to rush with the development of Artificial Intelligence, when the natural intelligence has not reached even half of its capacity in most people?

I can’t be sure what they will call this era in the future, but I would like it to be something like:

… the ones who reached for the stars, but realised that in the soul there is also a universe, much more important.

The ones who invented wonder… and at a certain point discovered that man needs to be strong on the inside and not on the outside, so they subjected technology to be the most useful slave, in order to keep themselves free.

The ones who turned the planet into a big village and once they had a taste of exploitation and racism, chose unity and brotherhood of the varied and different than the fake pseudo-unity and the orchestrated division.

Will that be the case? It depends…. It depends both on you and on me.