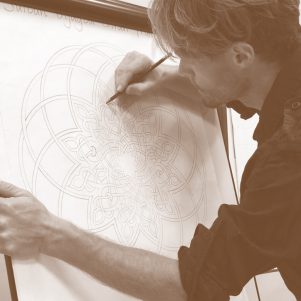 Adam Williamson is an award-winning calligrapher and sculptor whose permanent public works can be viewed around the U.K. He is drawn to particular shapes and patterns that embody universal principles found in nature, made visible through the hands of craftsmen. Adam has been commissioned by many prestigious clients including Oxford University, Shakespeare’s Globe London, Westminster Abbey, to name just a few, and has given numerous public lectures and workshops at leading cultural institutions all over the world.

New Acropolis Culture Circle had the honour of hosting Adam in an online interactive talk on Sacred Geometry where he explored patterns, not just visually but to give us an insight into seeing some connection with the whole.

Adam began by sharing his journey and the process by which he found himself on this path.

Adam: I’ve grown up with a father who was a carpenter and parents who were interested in Sufism, and various spiritual approaches and I think I was hard-wired from a very young age to focus more on application and practice. So as soon as I left home I travelled all over the world looking for Master Craftsmen. Though I was initially looking for practical skills, what I didn’t realise was that you learn so much from the masters because there is something about them that is ascetic: they’ve given up so many desires to be a craftsman, and put in thousands of hours to “see” into their work and to reveal it. And there’s a gift that these patterns give to these practices and that’s what I’d like to share.

Sacred Geometry is for me really a way of accessing divine knowledge in a scientific & rational way, a way to understand nature, and this divine code, to actually experience it and feel it.

Whether I’m working in Morocco or Malaysia, discussing patterns on a carpet, I find they are all interlinked, the craftsmen have the same approach and it’s clear what Beauty is, the archetype that is absolute, and that we can all agree wholeheartedly on what is beautiful. And then there are patterns within patterns. I can remember as a teenager going to Alhambra Palace, and other places and not really understanding what I was seeing, but being affected by it, because you are elevated by these patterns: they have a lot of intuitive work behind them that really hit a spot within your heart.”

Reflection: What emerges so strikingly from Adam’s words is that as human beings we clearly resonate with the archetype of Beauty.  Craftsmen intuitively use these patterns. Art & Architecture that still move us today have used these patterns. The fact that they occur so universally across all geographies of space & time is perhaps evidence that in spite of our diversity there is something that deeply connects us all: a universal resonance with the archetype of Beauty.

Adam then spoke to us about the Golden Ratio that was used most famously perhaps by Leonardo da Vinci, and is embedded in much of the art and architecture surrounding the Renaissance. Many of these ideas were first offered by Pythagoras and then by Plato who noted that if a line was divided into 2 unequal segments such that the smaller segment was related to the larger in the same proportion that the larger was related to the whole, this would result in a specifically pleasing relationship that came to be known as the Golden Ratio.

Adam: “Relatedness or relationship is the key to understanding what Golden Mean and Golden Meaning is all about. To strike a Golden Mean relationship is obviously to get much closer to the truth, which in turn can indicate the unity of the whole universe.” That’s a quote from my teacher Keith Critchlow. And isn’t this what our path is?

Not only does the Golden Ratio and the Fibonacci Spiral that is created from it appear abundantly in nature – in flowers, seed-pods, pinecones, sea shells, hurricanes and galaxies but the human body is also completely full of the Golden Proportion: The elements of your fingers, the finger to your hand, your hand to your elbow, your elbow to your shoulder, the distance of your eyes,… it’s incredible, it’s like magic. These are the ways we can marvel at the human body because it’s not just coincidence.”

Reflection: What surfaces from this is the realization that patterns are really the building blocks of the universe, and everything in it. This idea emphasizes that we are all part of one whole interlinked web of life. We are all built from the same pattern, proportion, and geometry. We are of nature, and nature is part of us.

Adam next tackled three-dimensional geometry and Platonic Solids which are convex solids whose faces are identical, with each side composed of a regular polygon. Though these shapes have been used a thousand years before Plato, they are assigned to him as he was the first to document them as symbols related to the elements: Earth, Fire, Water, Air and the universe. Interestingly, cultures across the world from Japan, Aboriginal Australians, and Native Americans all use these same symbols to signify the same thing.

Question: Do you have a theory as to why some ideas of beauty and shape are universal across cultures and times horizons?

Adam: I think it flows very much from how all people connect to universal beauty. It’s the archetypal Beauty that we are returning to. Ancient Traditions didn’t have as much confusion as we have now. Today I see social media, movies, entertainment as modern Alchemy. Your attention is being pulled away from the archetypes. It is quite dangerous. If you don’t have a practice, you can be washed away in all of this for the rest of your life. But when you lived in the mountains, forests and deserts, connected to nature, that’s when the archetypes get mirrored into your lives, all across the world.

Question: Can you share with us how this understanding of sacred geometry as part of all life may have caused a shift in your perspective of the world?

Adam: I feel at peace when I see these signs all around, these proofs that there is universal order. I feel it deep within me when I’m working, not highs & lows but an equilibrium. When I’m drawing or carving I feel like I’m in a safe place. I would seek out any opportunity to do incredibly arduous carving projects because I felt as if my atoms connect to that process.

Take my earlier example of the Fibonacci Spiral on pine cones: At the beginning it’s a little chaotic, but as the spiral grows outwards it gets tighter and closer to the Fibonacci sequence. It’s like that in nature, the seeds are born into this world and as they grow towards the light they get more divine, closer to perfection.

Question: You have spoken in other talks of how the Arts and the Sacred Geometry are a means to educate ourselves. Can you elaborate on that for us?

Adam: It’s so completely simple. If you really stop and look at nature, at Sacred Geometry it has all the wisdom you need. And this is the lesson for me to learn: When you are rigid, when you don’t have balance and equilibrium, you’re constantly feeling like you’re not in control, and things are not working out because it’s your fault, or it’s just unfair. And that is not a nice space to be in. But when you understand the universal order, even when you’re in a really tough moment, well there is a purpose and when you have that trust, you are in a place of relaxation.

Reflection: The idea that the entire universe follows precise mathematical laws suggests a divine order. The same sacred geometry that is present at the cellular level in the shape of our DNA is present in the movement of the stars and planets: Nature is telling us, As Above, So Below: that nothing is in isolation, everything is intimately connected.  In Art and Architecture, sacred geometry of pattern and proportion is a language that communicates aesthetic, philosophical and mathematical archetypes across differing cultures and traditions. These patterns within patterns are symbolic of the connection of the part to the whole and serves as a visible reminder to us of the Principles of  Correlation and Unity.

Adam began his talk to us with this invocation, but the words of Keith Critchlow referring to 3 great archetypes are an equally  fitting end to the remarkable evening of insights and wisdom he shared with us:

“May we all be guided by Truth, May we have Beauty revealed to us and May it result in the Good.”