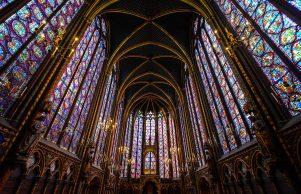 From that moment, in France and all over Europe, Gothic cathedrals and churches started to spring up like mushrooms. Many historians and architects think that the Gothic was an evolution of the Romanesque Style. In a way it was, but both those styles were being used simultaneously during the 12th and 13th Centuries, as they were the work of two different guilds.

So how is it that such magnificent buildings – the size of a stadium in some cases – started to appear out of nowhere, with a technology that had never been seen before in Europe?  Who were those builders and what did they intend to achieve through those cathedrals?

The word Gothic seems to have different origins: from the Celtic “Ar-Goat”, meaning built with wood; from the Greek “Goes – Goetis”, meaning magic or sorcerer; or from the Kabala, in which Gothic Art would come from the “Argotic” (Ars Gotica) which would make the Cathedral an alchemical “Athanor” or furnace, a place of transmutation.

The Gothic style should not be understood as an art, but more as a tool, a tool of transmutation. This was the meaning of the early Gothic, also known as True Gothic. By the end of the 13th century the Gothic had already lost its purpose and had become just an art form, however beautiful it still was.

3 elements are key in the building of a Gothic cathedral: