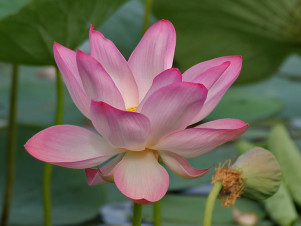 In the Orient, this flower has various symbolic aspects but its main characteristics stem from the fact that it blossoms on stagnant waters. This is why the lotus is seen as a symbol of purity; although blossoming on murky waters it remains immaculate.

Rising out of the darkness to blossom in full sunlight, this flower is the symbol of spiritual fulfilment. It represents manifestation that emerges on the surface of the primeval waters, like the Cosmic Egg. The closed bud contains the realization of the potential hidden in the initial seed.

The flower is also the symbol of cosmic energy since it has eight petals, just as there are eight major directions of space. This is why it is used in the drawing of many mandalas and yantras. Hindu iconography depicts Vishnu sleeping on the surface of the causal Ocean often represented in the shape of a lotus. From Vishnu’s navel emerges a lotus in which sits Brahma.

According to Buddhists, the lotus represents the nature of Buddha, unaffected by the surrounding Samsara. The Jewel in the Lotus, mani padme, is the universe as the receptacle of Dharma, from which Nirvana emanates. The Buddha, in the middle of the lotus, carries out his role as Chakravarti. In the centre of the lotus Mount Meru can also be found, the World’s Axis. The lotus with one thousand petals represents revelation in its wholeness.

Japanese literature often uses the lotus as an image of morality.

In Ancient Egypt, the lotus symbolized birth and rebirth. It is the first birth emerging from the primeval waters. The blue lotus is venerated as the holiest of all.

Read the original article on http://newacropolis.org.za/FoodforThought.aspx?p=articles&news=35