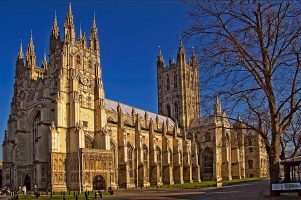 There is a certain magic in a journey, especially when one does it with an awareness of the world around and within. It gives an opportunity to get out of the ordinary rhythm of life and open up to new experiences. If a journey has a spiritual meaning, it adds a whole new level of depth to the experiences and provides an opportunity for renewal and rediscovery of oneself.

People have traveled to places of spiritual significance from the dawn of history. The records of pilgrimages discovered by archaeologists date back as far as 6000 years. The UK has many pilgrim routes and sites from different periods of history that keep the memory of the past and their sacred meaning. One of the most significant places is Canterbury.

Even before becoming a centre of pilgrimage, Canterbury was on some of the main routes for travellers. In pre-Roman times a settlement now known as Canterbury was located in the area of ancient trackways along the edge of the North Downs towards the major sacred centres of Stonehenge and Avebury. The trackways later became the Pilgrims’ Way from Winchester to Canterbury.

When the Romans came, Canterbury (then – Durovernum Cantiacorum) was their second significant stop. It was rebuilt and included in Watling Street – a paved route from the Roman ports in Kent crossing the Thames bridge in London to the north. This route became another part of the Pilgrims’ Way from London to Canterbury.

In 597 St Augustine of Canterbury arrived with an official mission from Rome to establish Christianity in Kent. Before his arrival, Canterbury already had a Christian church of St. Martin dating back to Roman times. It became St Augustine’s first headquarters. Later the missionary founded the abbey of St Peter and Paul, and the cathedral of Jesus Christ the Saviour. All three are now UNESCO world heritage sites.
After the death of St. Augustine, the abbey was renamed in his honour and with time became “the mother school, the mother university of England”. It also attracted many pilgrims.

The grand building of Canterbury cathedral that we see now was started by Lanfranc of Canterbury and St. Anselm in the 1070s. The magnificence of its architecture and internal design reflects Canterbury’s historic and religious importance. In 697 Canterbury became the centre for the entire English Church and, with time, a prominent religious and educational centre for the whole of Northern Europe.

Canterbury was once a starting point for the Via Francigena to Rome and Way of Santiago de Compostela. It also became the main English pilgrimage destination for Europe after the tragic death of the archbishop Thomas Becket in 1170. The murdered archbishop was canonized shortly after his death and his shrine attracted pilgrims for around 400 years until it was destroyed by Henry VIII.

One of the first prominent pilgrims to Canterbury was King Henry II. The king made a long journey barefoot to atone for his inadvertent hand in the death of his former friend and adviser, who became a pious and devoted archbishop. Veneration of St Thomas the martyr spread throughout Europe, with chapels and churches dedicated to him opening in Scotland, Spain, France, Sicily and Hungary. Many Europeans journeyed to Canterbury, including Louis VII of France and the Holy Roman Emperor Charles V.In spite of the main relic being destroyed, Canterbury retained its special place in England’s religious life. The interest in the Pilgrims’ Way was renewed in the 19th century.

Nowadays pilgrimage is undergoing a revival. Through it people reconnect with the community, history, values and ideas symbolized by the pilgrimage sites. Although being a pilgrim is a state of mind rather than a formal name of a person travelling to a sacred place, such a place, whether natural or built, helps to focus the mind on something transcendent; and the route towards it, as well as the effort connected with it, makes the process of transformation possible. Have a good journey!