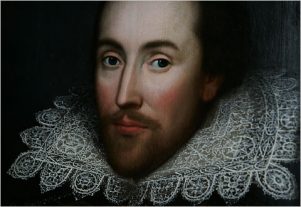 It is quite remarkable to consider how many words and phrases in regular use today were first penned by William Shakespeare. The literary critic Bernard Levin picked out a few of them:

“If you have ever been tongue-tied, a tower of strength, hoodwinked or in a pickle, if you have knitted your brows, made a virtue of necessity, insisted on fair play, slept not one wink, stood on ceremony, danced attendance, laughed yourself into stitches, had short shrift, cold comfort, or too much of a good thing… you are quoting Shakespeare.”

At the time of Shakespeare, Elizabethan England was vibrant with influences from around the world. It was a time of famous explorers and pirates, of new lands and legends of the high seas. Adventurers: Sir Walter Raleigh and Sir Francis Drake. Scientists and philosophers: Sir Francis Bacon and John Dee. The Elizabethan era was a transition between the middle ages and the modern world, an English Renaissance. It was a melting pot of ideas and influences, from Greek literature and philosophy to Roman thinking and the principles that make for a civilised man and society. Everything was up for discussion and interpretation at the time that Shakespeare was writing.

Despite the multitude of foreign influences and advancements in science and philosophy, the language of Medieval and Renaissance England was still comparatively under-developed. The concepts they were encountering in other languages led to a huge appropriation of foreign words into English, many of which are credited to William Shakespeare.

How much did these Shakespearean appropriations influence us today and to what lengths can we really know?