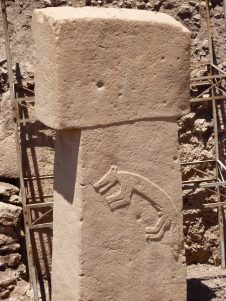 A German archaeologist called Klaus Schmidt found the ancient site of Gobekli Tepe in Turkey in the early 1990s. It took Schmidt almost two decades of digging to unravel only a small part of the site, which is huge (around 30 times larger than Stonehenge). It is composed of large circles of T-shaped columns, most of which weigh between 15 and 20 tons, and some up to 60 tons.

But what make this site particularly unique and amazing is that it was deliberately buried more than 10,000 years ago. And some of its stone circles date as far back as 11,600 years ago (9,600 BC). The fact that the site was deliberately buried is strange, but it allowed the carbon dating to be accurate –and troubling – mainly because it pre-dates any other megalithic sites in the world by around 6,000 years!

It is even more troubling when you think that the end of the last ice age was in 9,600 BC. Gobekli Tepe acts as a time capsule, allowing us to see that humanity was more advanced than we thought. As a mainstream archaeologist, Klaus Schmidt was forced to accept that this makes the builders of Gobekli Tepe the first in many categories, such as stone carving, stone construction and agriculture. In just a few decades after the end of the last ice age, when most people were supposedly just hunter gatherers living in caves or primitive houses, Gobekli Tepe emerges and astounds us all. It is also a reminder that the last period of the ice age (known as the Younger Dryas) ended brutally and probably in a dramatic and cataclysmic fashion.

After just 20 years of excavation and research we have yet to understand why Gobekli Tepe was built and by whom.