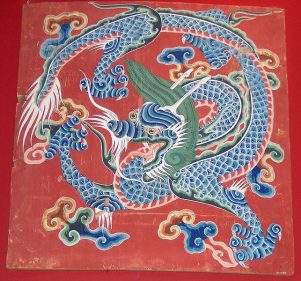 Masterpieces of Tibetan art found in the private temple of the Dalai Lamas have been reproduced and displayed for the first time in a special exhibition at the Wellcome Collection in London.

The Lukhang, or “Temple to the Serpent Spirits” was built in the late 17th century on a lake behind the Potala Palace in Tibet’s capital city of Lhasa and it was used only by the Dalai Lamas as a place of meditation and spiritual retreat.

The Lukhang temple itself is a three-dimensional mandala harmonizing the cosmos and the human being. The temple has three storeys. The ground floor is built in Tibetan architectural style, the first floor in Chinese, and the top floor in Mongolian style. The top floor is actually a meditation chamber with painted murals indicating the path to enlightenment. Tibetan Buddhist art is sacred; its intention is to represent knowledge of the invisible world in visual form

There are various yogas and meditation techniques, but the Lukhang murals reveal a system called Dzogchen, or ‘Great Perfection’, which was introduced into Tibet in the eighth century by Padmasambhava. This is one of the most secret practices in Tibetan tantric tradition. Padmasambhava described Dzogchen as “the mind looking directly into its own essence”.

For the Dalai Lama the purpose of art is to inspire you to achieve enlightenment. If a work of art gives you the motivation to overcome ignorance, greed, and anger, then it is a great success.