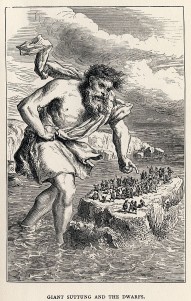 Gaia, the Earth, gave birth to the Giants in order to avenge the Titans whom Zeus imprisoned in Tartarus. They are chthonian beings, symbolizing, by their gigantic physical mass and their spiritual poverty, the predominance of forces arising from the Earth. Giants represent magnified commonplaceness and the image of unrestrained physical and brutal instincts.  They can only be overcome by the joint efforts of a god and a man. All the Gods who fought the Giants as Athena, Dionysus, Aphrodite and Poseidon, entrusted a human with the task of exterminating the monsters.  The evolution of life in the direction of increasing spiritualization represents the real battle of the Giants. However this battle involves an effort to be carried out by man himself.   The myth of the Giants is a summons to human heroism.