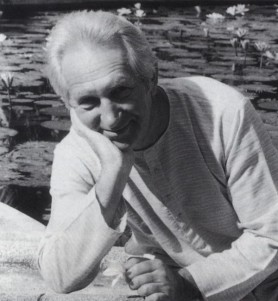 The World is a Sanctuary – according to Henryk Skolimowski, a contemporary Polish philosopher regarded as the father of eco-philosophy – and not a Machine, as Newton proclaimed. Skolimowski studied at Oxford, where he received his PhD, then went on to teach philosophy for many years in the United States.

Skolimowski’s eco-philosophy goes against the mainstream philosophical worldviews, especially the mechanistic ones, which originated in the 17th century. Newtonian theory regarded nature as a clock-like mechanism, within which we are little cogs and wheels, and this has allowed humanity to abuse and destroy the planet. Skolimowski also criticizes the analytical-linguistic approach of philosophy, as being too abstract and too inadequate to answer the challenges of our time.

However, Skolimowski’s proposed solutions to these problems are based on the key idea that the world is something unique, precious and sacred. He says that reverence for life has to be our guiding value. Man on the Earth is just a guest, not an owner, so we shouldn’t behave like a conquistador, but a steward. The Earth is just a temporary dwelling, of which we must take the utmost care. He called this Ecological Humanism.

He also writes about the Benevolent Cosmos, an idea which comes from ancient times, where – like Plato in his work Timaeus – the World (Cosmos) was regarded as a living being. This Cosmos came into existence to generate life and then to bring about human life. One of the main attributes of the Cosmos is creativity, because it is moving towards self-realization. As the Cosmos is physical and at the same time transcendent, it is ruled both by physical and by trans-physical laws.

Skolimowski regards humans as cosmic beings. As we emerged from the soup of evolution and developed imagination and creativity, so we became able to remake the shapes of the universe and ourselves. In common with some of the Eastern philosophies, he thinks that we incorporate all stages of the evolution of the Cosmos within our blood and in our brains. But we are more than that, as we can think, love and create, so we are like the eyes, minds and loving arms of the Cosmos.

He points out the great paradox of the Western world: while we are acquiring more and more developed technology, we are degrading and forgetting culture, seeing it as an anachronism of the pre-modern era. Culture, however, which provides a set of dynamic structures for living, is much more than just memories from the past, it is an inherent part of the human being’s strategies for survival and well-being. And at the same time, it gives meaning to life. Today, although we have more comfort and skills, thanks to the machines we have built and surrounded ourselves with, we have no clue about the meaning of life. We do not find meaning in consumption, entertainment or technology.

But we still need a larger purpose. For this we need a transcendent dimension to our life, which is often, but not always, connected to religions. But transcendent goals do not mean a religious agenda and they should not be mistaken for a religious belief. And it should not be a secular agenda either, as instead of providing us with happiness and fulfilment, this deprives us of these at a deeper level. Skolimowski is very optimistic about the future, saying “a wonderful journey lies ahead of us as we seek to actualize the cosmic meaning which resides in us, to help the universe and all its creatures in the journey of self-actualization and in the process of healing the earth and making it blossom again.”