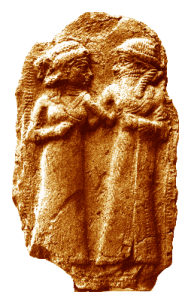 The marriage of Inanna and Dumuzi, reproduction of a Sumerian sculptur

The principle of the life force on which everything depends, along with fertility, love and procreation were just a few of the principles that Inanna, one of the oldest Sumerian Goddesses, represents.

Her name means Lady of Heaven and she was associated with the planet Venus, the morning and evening star. The rising and setting of Venus correspond with the movements of Inanna, especially in the myth of Inanna’s descent to the underworld. According to the myth, Inanna passes through 7 gates in her descent, removing at each one a piece of clothing or jewellery she had been wearing. By the end of her journey, when she meets her sister, Erishkigal, Goddess of the Underworld, she is naked. She takes her sister’s place on the throne but shortly after she is turned into a corpse. Ninshubar (Inanna’s servant) asks for help from the Gods to save Inanna. Erishkigal agrees to give back her corpse in exchange for a replacement. The replacement was Dumuzi, Inanna’s husband.

This simplified version of the myth has many symbolic meanings. Inanna’s journey to the underworld and her passing through 7 gates can be seen as a journey of transformation or initiation. Leaving a piece of clothing at each gate could be interpreted as giving up her attachments, one by one. When she arrives at the throne, she has nothing but her authentic self.

Inanna appears in many roles: as a seeker, a wife, a decision maker, and in her myths we see the conflict within ourselves, the transformation, the path of discovering and facing ourselves, as well as the concept of life and death. This ancient Goddess is so powerful that the hymns and myths about her have a wisdom which is still relevant in today’s world.

If any images used in this article are in violation of a copyright, please get in touch with webmaster@acropolis.org.in as soon as possible. Appropriate action will be taken.
Image References
By GifTagger | Wikimedia Commons | CC BY PD