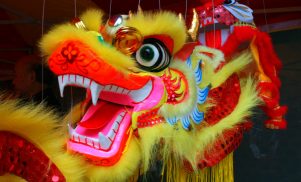 The Chinese Dragon is the most ancient and most important mythological and esoteric symbol of China. The origins of this symbol are lost in the mists of time. In China, artefacts depicting dragons have been unearthed which date back to the fifth millennium BC. It is said that the ancient people of China saw themselves as the descendants of the dragon and even today Chinese people feel a strong connection with this symbol.

There are representations of dragons practically all over China. The most important of these are found in royal palaces, sculpted or painted in temples or woven on silk robes worn by high priests and royalty. The symbol of the dragon (especially the Yellow Dragon) was the symbol of imperial authority, the emblem of the emperor. Legendary emperors like Huang-Ti (Yellow Emperor) and Yan-Ti were both closely related to ‘Long’ (a generic name for the Chinese Dragon). There is also a story which connects the mysterious figure of Fu-xi with dragons. According to this tradition, Fu-xi had the arrangement of the trigrams of the I Ching revealed to him in the markings on the back of a mythical dragon-horse.

In the various alchemical, religious and philosophical writings of China, there are many references to Chinese sages who, after gaining immortality, became identified with the dragon and ascended to heaven. After his meeting with Lao Tzu, Confucius allegedly remarked “I cannot tell how he mounts on the wind through the clouds, and rises to heaven. Today I have seen Lao Tzu, and can only compare him to the dragon.” Besides the popular ‘Long’, there are more than 100 ancient dragon names attested in Chinese classic texts.

Unlike the “evil” dragon of the Western imagination, the Chinese dragon is a beneficent and gracious creature. In popular mythology it signifies power, excellence, goodness, perseverance, heroism, nobility and greatness. It brings energy, optimism, intelligence, courage, good fortune and ambition. In the philosophy of the Yin and Yang, it is identified with Yang – the “positive” and active pole of life, the realm of spirit, heaven and the divine. In one tradition, we find three classes of dragons: the lowest were the Li Lung or earth dragons, whose realm was the waters of the earth, the second class were the Chen Lung who were associated with storms and clouds (the astral realm) and finally we find the Tien lung or celestial dragons, who belonged to the spiritual realm and guarded the mansions of the gods.

In one form, we find it coiled like the Ouroborus, the symbol of the eternal return and the totality of life. The Chinese dragon is related to the number 9, the most sacred number in China. 9 is the symbol of time and cyclicity. A legend speaks of 9 major types of dragon: the horned dragon, winged dragon, the celestial dragon, the nature spirits dragon, the dragon of hidden treasures, the coiling dragon, the yellow dragon and the dragon king. These nine are the offspring of the primordial dragon, the unknowable “mystery”. Thus it becomes esoterically identified with the eternal and omnipresent TAO. This is why the dragon acquires an unlimited range of paranormal powers. It is said to be able to disguise itself as a silkworm, or become as large as our entire universe. Folktales speak of the dragon having all the attributes of the other 11 creatures of the zodiac, in other words, it contains within itself all the possible archetypes of existence.

Some scholars have suggested that the form of the Chinese dragon comes from stylized depictions of existing animals, such as snakes, fishes or crocodiles. Interestingly enough, in Chinese Buddhism the dragons are analogous to the Hindu Nagas, the wise serpents, who are depicted emerging from the mouth of Makara (the mythical crocodile, vehicle of Varuna in the Vedic tradition). These symbols suggest the analogy between the mythical dragons of ancient China and the Initiates, teachers of mankind who, like fishes (see also Hindu, Assyrian and Babylonian Myths), emerge from the ocean (symbol of past evolutionary cycles) and, after having accomplished their “avataric” tasks, return into the sea.

With this short article I hope to have inspired you to dip your feet as well as your hearts and minds into the “rich” waters of Chinese mythological symbolism. And who knows if one day, you will not end up face to face with the Dragon itself.