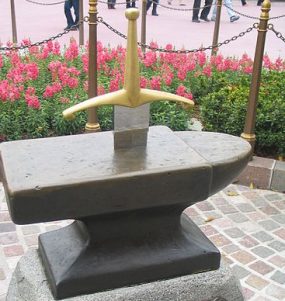 Like all mythology, that of illustrious King Arthur has endured the test of time, transmitting essential eternal values that serve to inspire human civilizations of all ages. From its tale, it is not always easy to demarcate between elements of documented history and magical folklore, but perhaps in this very enigmatic characteristic lies the motivation to investigate and extract its essence to apply in our own times.

Although of direct royal lineage, it is said that young Arthur was raised in secrecy by Merlin the Wizard, a great teacher. After the death of King Uther Pendragon the absence of an heir resulted in a period of dissent and instability. Merlin prophesized that he who was able to draw out a majestic magical sword, called the Excalibur, from a stone in which it was embedded, should be rightfully crowned the next king. Unaware, Arthur fulfills this prophecy, and is propelled to seize his destiny by ascending the English throne, to give rise to an unprecedented golden age of prosperity and culture, fueled by values of knightly courtesy and heroic deeds. They were glorious times of chivalry, when Knights and Ladies are said to have devoted themselves to express noble virtues such as loyalty, self-control, generosity, compassion, mercy, justice, and honor.

How wonderful if an Excalibur were to be found today, to give impetus to such a golden age in our own times? Where might we find it? And how might its destiny unfold to manifest in our world? Notwithstanding the remarkable technological progress we have nurtured over the past hundred years, we must wonder…have our advancements helped improve the human condition? Are we today better human beings…happier, or wiser, than in the past? And if we find ourselves hesitant to answer, I suggest that somewhere, in the course of history, perhaps we lost sight of what this progress was meant to serve. The values that steered King Arthur’s kingdom seem to have sunk into obscurity, leaving us in an ethical vacuum, a sort of free-for-all, where each one fends for himself, most often at the cost of another, regardless of any obligation to the collective. If we are to change the legacy we leave to the future, we are faced with the need to change ourselves; become once again Knights and Ladies, so that our world may once again blossom.

History books and fairy tales alike, paint a vivid picture of a Knight, dressed in shining armor, atop a handsome white horse. A model of aesthetics and decorum, expert in the arts of combat, and a master of his sword, a Knight’s primary duty required him to protect the kingdom’s subject against all injustice. It is interesting to note that the symbolism of a noble-warrior-hero responsible for the welfare of a just society is not unique to medieval European folklore. Its presence is found in a wide array of ancient mythological traditions, and suggests a persistent inner state of battle, in which the Knight first dedicates himself to continuously defeat his own internal enemies, the many vices, to emerge victorious from an inner ethical battle. This inner victory manifests externally in the sheen of his armor, evocative of the sheen of the Knight’s character; adherence to chivalrous virtues such as loyalty, justice and honor, an endeavor to be the very best that the Knight can be.

As if in paradox with this warrior spirit is the gentle courtesy that a Knight or Lady extended in each interaction. The most iconic imagery that demonstrates this is of a Knight leaping off his horse, removing his cape to cover a puddle so that a Lady might cross it without the slightest discomfort. Perhaps the custom of pulling out a chair from under a table, or opening a door for a woman, originates from this courtesy. Today these practices often feel unnatural, and are sometimes ridiculed. Feminists might even perceive it as being disrespectful. But it is imperative to consider that these displays of courtesy were meant to be a natural expression of an inner courteous state of mind. The word ‘courtesy’ connotes the behavior befitting the court, the arena in which every member of the nobility conducted him/herself with formality, requiring attention and awareness; not because of the value of the formality itself, but because the expressed conduct was a natural reflection of a virtuous and courteous character. It follows that such courtesy would extend to all realms of life, beyond the court.

Social norms today have radically changed, and formality is often frowned upon as being artificial or inauthentic. This is ok. With it, however, we seem also to have lost the attention and awareness of how we conduct ourselves; what we say, how we say it, how we behave, etc. Perhaps this is unjustified. Represented by the ancient symbol of the double-sided axe, or the sword of Arthurian legend, attentive external practice naturally deepens the internal ethical state of a human being, while progressive inner work naturally expresses itself in action. Hence, while the action itself might change and take different expression with each passing generation, we must remain committed to inner ethical progress, inner depth; that is what differentiates us, and truly makes us human. To this end, there might be value in reviving ancient customs that can aid our ethical development, which in turn, will likely make us more courteous, and improve the way we interact with each other, and with our surroundings.

King Arthur’s court comprised of legendary Knights and Ladies who set off on heroic missions, sometimes requiring brute masculine strength, and sometimes involving finer feminine sensitivities. Conquests and achievements at these missions are a source of great inspiration for us, however, we might easily be captivated by their glamour and dream about victory, and fantasize mighty achievements. It is possible that our individual destinies might yield such victories. But it is only wishful thinking if in reality we shy away from, or are defeated by, our own daily challenges. We may dream about solving world hunger, but are too lazy to fill even a glass of water for ourselves. We may imagine a country governed by an ethical leader, but are too weak to stand up against a bullying hooligan. A hero’s heroism depends not on the glory of his destiny, but on his overcoming humble challenges on a daily basis, that direct his destiny towards glory. In that sense, one might say that a true Knight or Lady, is most defined by his nobility. Just as a noble metal such as gold resists oxidation, and is able to consistently maintain its shining allure, so too a true nobleman’s, or noblewoman’s, actions are said to remain always heroically untarnished.

The learning we derive from the tradition of Knights and Ladies may seem too demanding, even unrealistic today. Certainly it is unlikely that any impending revolution might suddenly visibly alter the course of history. But we must remember the teaching imparted in the Bhagawad Gita, which states that we must act without attachment towards the fruits of our actions. We must act because it is the right thing to do. We might see our reality transform in our own lifetime. Or it might take several generations. It doesn’t matter. What matters is the deliberate contribution towards it, which will be immortalized in the legacy we leave behind. What matters is uniting our best intentions with real efficient actions.

What is exhilarating is that this unity depends entirely on each of us; on the powerful force of Will, unique to human beings, which resides in our innermost chamber of consciousness. Although weighed down under external pressures like fear and weakness, when unleashed it can preside over every other force. But as with Arthur’s decisive grip on the Excalibur, it requires resolve, persistence, and hard work. And it requires mastery over oneself, victory over daily ethical battles, each an opportunity to grow, learn, and evolve. In the process itself lies the glory befitting a legendary Knight or Lady. Because anyone can win a battle with access to the very best weapons. Forging these weapons, however, is the destiny of just a few.