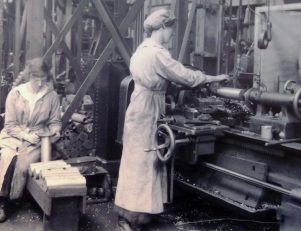 We have all encountered, from our school days to the present day, all kind of references about the industrial revolution and how it changed life first in Britain and then in the whole world. A shift from an agricultural life to people migrating to live in the growing cities, in order to work in the newly created factories that the industrial revolution brought with it, resulting in a dramatic change in lifestyle.

The first industrial revolution, the famous one, goes from 1750 to 1820 in general terms and brought great mechanical innovations such as the steam engine, applied to the textile industry and the railways among others, with coal as the main source of energy. The growth of industries such as coal, iron, railroads and textiles contributed to the development of manufacturing and businesses and the number of wage labourers simply skyrocketed. By the time of the American Revolution the people in Britain had begun to use machines to make cloth and steam engines to run the machines. Many rural traditions were lost in the process due to the new life on the outskirts of the main cities and, as the 19th century progressed, all labour workers began to dress in the same way, leaving behind their regional costumes, as had never happened before.

In the 1830s electricity was in its infancy and there was a debate on the possibility of it being the source of life, as we can see in Mary Shelley´s novel Frankenstein.

The second industrial revolution, considered to have taken place between 1870 and 1914, brought a new source of energy – petroleum – which, together with electricity and steel, became the source of many innovations. Most of these innovations and inventions shaped the 20th century, just as those of the first industrial revolution had done for the 19th century. Electrification, in fact, made mass production possible. Steel mills gave way to the production of many new products impossible to even imagine without the new materials available. Electric light transformed the cities and the automobile began to replace railways as the main source of  locomotion. It is impossible to forget here the assembly line invented by Henry Ford, which has been copied by every industry ever since.

Skyscrapers were possible thanks to the new materials, as well as the lifts required to reach the higher floors which otherwise would have been impractical for daily use. The Diesel engine was another technical innovation, as was the arrival of the aeroplane , whose development, it must be said, took off during war times. The telephone was decisive in developing communications, as was the typewriter, which replaced the good old fashion quill.

Phonographs allowed sound to be reproduced in an artificial way for the first time. Photographs replaced paintings as witnesses of daily events and not much later motion pictures brought a totally new dimension to the reproduction of reality as something feasible. But probably the most relevant invention regarding household chores was the washing machine, which saved time and effort for housewives for the first time in history.

The third industrial revolution is considered to have taken place in the 1990s with the arrival of the internet and the popularization of personal computers. The speed of the normal post was beaten, albeit briefly, by the fax until it was replaced by the email. All these development meant that the speed – and quantity – of communications increased greatly.

The fourth industrial revolution is supposed to be still in progress. It brings mobile communications, connectivity of devices, the social media and artificial intelligence. Barriers between the physical and digital worlds become confused and people have started to be permanently connected.

It is extremely important not to forget that all these changes, in the last two and a half centuries, have meant a lot for the welfare of many people and the improvement of their living standards. But while all these inventions and new digital devices are supposed to be there to help us, they have ended up shaping our lives to the point that it is simply impossible for very many people even to consider the possibility of not having them around us. All these advances, and the speed which comes with them, mean nothing from a human point of view if we are not in charge of our own lives.