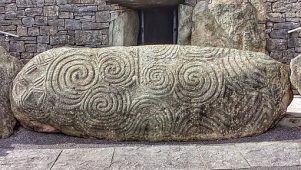 What is the history of the Prehistoric peoples of Britain, how far can we go back, and who were the people of these ancient Isles?

Britain’s history of human occupation goes as far back as the Palaeolithic age, which means ‘Old Stone Age’. Archaeologists have uncovered remains of our early human ancestors dating to 40,000 years ago. During this time, our early ancestors did not live here permanently as the climate fluctuated erratically between ice ages and sometimes became too hostile even for the hardiest hunters, pushing them out of this remote part of Europe entirely. Prehistoric remains of mammoths, rhinos and sabre tooth cats have been excavated relating to this era. Homo sapiens also shared this territory with other hominids, such as the Neanderthals and Homo Heidelbergensis. Altogether there were ten separate waves of occupation and expulsion.

The first permanent people of Britain were in the Mesolithic, or ‘Middle Stone Age’ period. Bands of nomadic tribes who were hunter-gatherers had plenty of space and resources to survive on. They lived mainly in coastal regions eating fish and game and foraging for plants to supplement their meat diet. This period marked the end of the last Ice Age around 11,700 years ago and continued up to 3,500 BC. By some accounts, there might have only been an estimated 5,000 people present in Britain at certain periods during this time.

During the Mesolithic period, Britain was still connected to continental Europe as a continuous land mass joined to France, Holland, Denmark and the lower tip of Sweden. The Thames joined the river Rhine as a confluence and emptied westwards as a wide estuary along what is now the English Channel. This mythic land is called Doggerland, and would have consisted of small rolling hills and fast-running streams. The fauna was an abundant forest of birch trees with plenty of game roaming within it and an ideal hunting ground for the Mesolithic people following the seasonal migration of deer.

There was contention as to whether this land had existed at all, but in 1931 conclusive evidence was discovered by accident by Dutch fishermen working on a boat called the Collinder. They were dredging with nets, far out to sea off the coast of Norfolk. The fishermen scooped up a mass of peat with an arrowhead made of deer bone embedded inside it. The finely carved weapon is dated to be as old as 9,000 BC.

By 6,000 BC this massive area of land became submerged. The land bridge to Europe was now severed forever, making Britain a solitary island. Doggerland disappeared as the sea levels rose from melting ice caps. The final and most horrific cataclysm was a tsunami that wiped out the remaining land mass and archipelagos in a single day. This event is called the Storegga slide, an underwater landslide by a mountain cleaving off the coast of Norway.

With Britain isolated from the rest of Europe, it was left to develop on its own, using ingenuity to survive in the harsh climate. These early people were shaping their environment to suit their needs by making clearings for hunting. There is also evidence of constructed settlements, though they were not permanently occupied as the people were still nomadic. In Howick, Northumberland, archaeologists discovered a building typical of this period. In less than 1,800 years, farming replaced hunting around 4,200 BC.

Growing grains is often considered the single most important development for humanity and emerged in the area around the river Euphrates around 10,000 BC, while Britain was still under ice. This practice took a long time to reach our shores. With farming, the population of Britain increased and by 3,500 BC a new era emerged called the Neolithic or ‘New Stone Age’.

It is with Neolithic Britain that we see incredible feats of engineering and the construction of impressive monuments such as Stonehenge. These so-called megalithic sites are not just located in the UK but all across Northern Europe and beyond. Agriculture not only allowed the Stone Age people to increase in numbers but also gave them more calories for such endeavours.

Finding the use and purpose of these Henges is still ongoing, but it is certain that the structures were calendars and places of ritual and ceremony. By aligning the sun to the monoliths, measurements could be taken that enabled the Neoliths to mark the seasons and the farming cycles.

Another type of construction are the burial mounds that are scattered around the British Isles, such as the Severn-Cotswold tombs, and Newgrange on the East coast of Ireland. The spiritual practices of these ancient people focussed on solar cycles including the immortalization of the soul after death. Many findings indicate that the finest of possessions were buried with the dead to take with them into the afterlife. The motifs of spirals, knotwork and cross-hatching were linguistic pictographs demonstrating a sophisticated culture that is deeply connected to nature, life, death and the continual cycles of time.

Britain has a rich heritage we should be proud of, extending deep into the past.