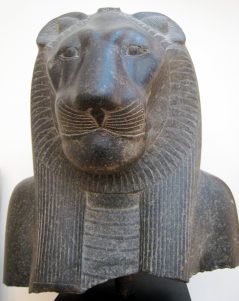 Spring gives us a unique opportunity to witness the immense power of life. Everything in nature awakens, opens up to the warmth of the sun and actively grows unfolding its potential. Observing nature I remembered the ancient Egyptian concept of “sekhem”, usually translated as “power”.  It has several aspects of meaning, indicating power in action. On the one hand, it is the vital force of a human being, which also accompanies him in eternity. It indicates not only a given energy, but also actions that restore universal order, and as such it means mastered power in service of the good. Another meaning is the power of a deity. And lastly, sekhem was magical power in mortuary rituals that enabled the deceased to overcome obstacles in the world beyond.

Sekhem is found is the name of a goddess – Sekhmet or Sekhet, She who is Powerful. She is a consort of the demiurge Ptah, and part of the main triad revered in the ancient religious centre of Memphis. Their child is Nefertum, a beautiful lotus flower that had arisen from the primal waters at the creation of the world. Sekhmet and Ptah are said to be parents of the sage Imhotep, whose wise words still inspire.

Other Egyptian myths tell the story of the first Seven Wise Beings who planned the world. The master architect and workman Ptah carried out the design of the Seven Wise Ones.  He and Sekhmet partook in the characteristics of the Seven.

Sekhmet was revered throughout the history of Egypt, from the time of the Pyramid Texts onwards. She was both a fierce warrior and a magician healer. She was believed to bring about the conception of the pharaoh. Sekhmet was protector of the armies and destroyer of the enemies of the land. She punished those who were doing evil and healed the righteous. She appears to be a personification of an active power that establishes divine order, purifies any distortion and restores Life.

If you see a beautiful and mighty statue of a woman with the head of a lioness crowned by a solar disk and the uraeus serpent on top of it, it is Sekhmet.  She was also  depicted as a lioness. Among her other names were the “(One) Before Whom Evil Trembles”, “Mighty Lady, Lady of Flame”, “Greatly Beloved One of Ptah, Lady of Heaven”. She has many names connected with different places and her breath is said to have formed the desert.

In nature, the power of life manifests by itself. In human beings we discover it by making choices, by becoming more true to our higher self. The Mighty Lady greets every victory in the inner battle.  One verse of the Egyptian Book of the Dead reads “May the goddess Sekhmet make me to rise so that I may ascend unto heaven.”