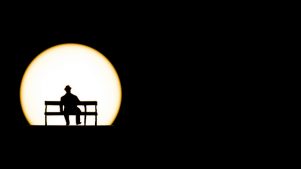 There was a blacksmith once who complained: “I am not well, and my work is too warm. I want to be a stone on the mountain. There it must be cool, for the wind blows and the trees give a shade.”

A wise man who had power over all things replied: “Go you, be a stone.” And he was a stone, high up on the mountain-side. It happened that a stone-cutter came that way for a stone, and when he saw the one that had been the blacksmith, he knew that it was what he sought, and he began to cut it.

But the sun was warmer than the blacksmith, than a stone, than a stone-cutter, and he complained, “I do not like this. I would be the moon. It looks cool.” The wise man spake yet again, “Be the moon.” And he was the moon.
“This is warmer than being the sun,” murmured he, “for the light from the sun shines on me ever. I do not want to be the moon. I would be a smith again. That, verily, is the best life.” But the wise man replied, ” I am weary of your changing. You wanted to be the moon; the moon you are, and it you will remain.”

And in yon high heaven lives he to this day.

Image Credits: By The Preiser Project | Flickr | CC BY 2.0

Image References
By The Preiser Project | Flickr | CC BY 2.0