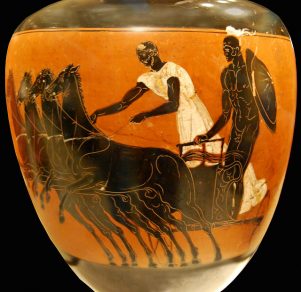 The charioteer is the symbol of calmness, self-control and mastery of the mind and psyche, so ever changing and unstable. He reduces the manifold, reaching us from the outside world, to the inner unity of will.

The horses of the chariot are our instincts and passions. In general there are four of them, corresponding to the number of planes making up the human being, according to the seven-fold constitution of man. The teachings of the most ancient eastern traditions divide man into seven planes: three of them constitute the vehicle of the Spirit symbolized by a triangle (Atma, Buddhi, Manas), and the four remaining form a square (Kama Manas, Linga Sharira, Prana Sharira and Stula Sharira), symbol of matter or physical body supporting the Spirit.

The charioteer is situated just in between the two parts, on the bridge called “¬†antakarana¬†” linking the upper and lower parts, that we could call soul and body, respectively. The charioteer represents the awakened mind that struggles to gain control over the ” four horses” of the four material planes, each trying to pull the whole team in its own direction. Constantly, the charioteer brings them back on the way he has chosen and keeps them under the control of his own will. Thus, the charioteer unites and harmonizes the fire of passions through the mastery of intelligence and reason.

The charioteer is the soul that awakens and sees itself divided. The soul understands that it has to struggle to make its own spiritual nature prevail over the material elements, holding firmly the reins of the quadriga. The hand that holds the reins symbolizes the knot that draws together spiritual and physical strength, the two antagonists of this battle. Plato treated this theme with aptness in his Phaedrus.

The most famous and symbolic charioteer is Arjuna, the Prince of the Pandavas, who, guided and encouraged by his spiritual master, Krishna, fights against his cousins, the Kauravas, to conquer the kingdom of Hastinapura. This battle is called “Bhagavad GÓta” or “The Lord‚Äôs Song” and is one of the most famous and symbolic episodes of the entire literature of India. The Bhagavad Gita is part of the epic ‘The Mahabharata’. Arjuna is the prime hero in this inner war called “flowered war” by the Aztecs. Arjuna is the disciple who, following his master, tries every day to conquer his true Being in an attempt to master and conquer himself.