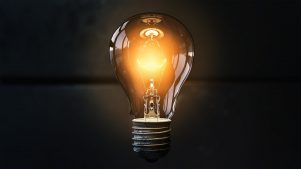 Energy is something we don’t really think about until we have to pay our electricity or gas bill, or when we go to the pump and fill up the tank. However, we don’t realise – and I was guilty of it myself until recently – that a 40-litre tank of petrol (E95) contains as much energy as 500 grown men would give you in one 8-hour day of hard labour[1]. So, let’s put things in context.

Energy, by definition, is what changes the state of something, whether it be movement, temperature, form or electrical charge, to name just a few. For example, for liquid water to transform into steam it requires an input of energy in heat form. So, in order to change our environment, to move, build, exchange or communicate, we need energy. Our ancestors had to use their own energy (muscles) when they could not use the (re)usable ones of nature. Ultimately all the energy we consume or use originates from the sun. Yes, even the evil fossil fuels we are so dependent on were once a by-product of the sun’s energy.

As human beings, there are only two forms of energy we can use directly: the food we eat in order to act and think, and the sun itself for its heat and then indirectly its energy to grow all the plants, insects and animals we need to sustain our body and ecosystem. With the domestication of animals, we were able to use their energy for our benefit. And animals need little maintenance or reward compared to humans, which is also why slavery was so tempting for too many millennia by nations with more power and/or resources.

Up until the end of the 18th century, roughly 99% of the energy and 95% of the resources we used were renewable or reusable. Then, the progress of scientific research allowed us to harness the power of fossil and later fissile (nuclear) fuels which are not renewable, unless you’re ready to wait a few ten to a few hundred million years.

Which means that our energetic footprint is now ten times greater than in the pre-industrial era. 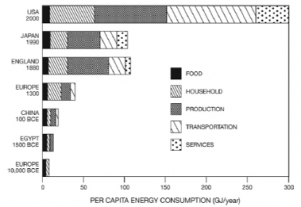 Figure from “Energy and Civilization: A History” by Vaclav Smil

And if the widespread use of fossil fuels, starting with coal, dates back to the early 1800s, the world has been going through a craze for “new” and cheaper energies only recently and since the end of the Second World War. Our transport system has been revolutionised many times, through the inventions of the train, car and aeroplane. From the way we dress, eat, work or move about, everything has been changed dramatically by the use of the “holy trinity of fossil fuels” – coal, oil and natural gas. Those three primary energy sources have never replaced each other but rather have been combined to respond to the constant demand for more and more energy. 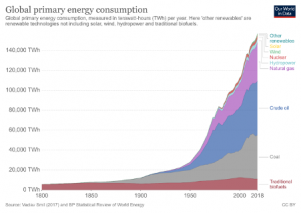 It is only in the past 20-30 years, and with great efforts, that we have been managing to slow down and even halt the increase in usage of certain fossil fuels like coal, by adding to the list the wonderful and highly praised renewable energies (wind, solar, hydro and biomass). But apart from nuclear energy – which in my opinion is the only true alternative to one of the three fossil fuels when considering the demand and supply of the current system, although it has some very significant safety issues – it is foolish to think that the renewable energies will supplant or replace the 3-legged elephant in the room.

In the past decade, the Centre for Alternative Technology has come up with a plan for a Zero Carbon Britain[1]. It involves not just replacing our current electricity generation and transport system with only renewable energies (mostly wind and biomass), but also reducing our global energy consumption by an impressive 60%.

Our modern society has become too dependent, if not – dare I say – addicted to what used to look like an abundant and limitless amount of energy. Therefore, we must go on an emergency diet if we don’t want to end up in dangerous complications when the supply eventually diminishes, as is the inevitable fate of all non-renewable resources, which will then stop completely in a not so distant future.