The Symbolism of the Ankh 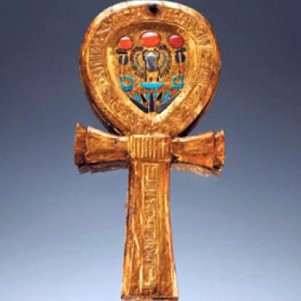 The Ankh is a cross. The symbol of the cross is extremely complex and has manifold meanings.  We find it in all religions and cultures as the representation of Man, at the point of convergence of Earth and Heaven. The Ankh is the ansate cross of ancient Egyptians. It is the key of life and death.  Starting from the upper part, the Egyptian cross is surmounted by a loop, an endless circle symbolizing the celestial world, the spirit of Ra, the Sun of Egypt. This circle is used as a handle by the Gods who carry it. This handle rests on the Earth, like the Sun on the horizon, when it rises or sets. This horizontal line symbolizes matter, and is nothing else than the illusory horizon line created by the gaze of man, whose fate as human being is not limited to the terrestrial world. Ancient Egyptians knew that their stay on earth was but temporal and was only a small part of a long evolution chain with millions of links.  The loop is associated with a vertical axis, representing the descent of our spirit in matter as well as the ascending path back to the origins. It is the reverse path that man has to follow, starting from the lowest point, and each time he is born to a new life, to start or to carry on his own ascension. In this way, man awakens his own consciousness as a human being. In other words, he develops his own judgement, with intelligence and will to follow his own path, feeling united with his upper Ego, his most spiritual or divine part.   This key also opens the doors leading to the world of the dead and to the esoteric sense of Eternity. In funeral rituals, the Ankh, held by the ansate loop, represents the key of the doors of the tomb and, placed between the eyes, it compels to keep secrets.  The Ankh is also seen as a magic link that ties up everything at the central knot that keeps things bound together. It is then called “knot of Isis” and has the meaning of “joining”, like the “yug” of Hindus. Isis is the second person in the Egyptian trinity formed by Osiris, Isis and Horus. She is the divine mediator. The goddess of love and life will reassemble the dismembered body of her divine husband Osiris, symbol of the Mystery. In the same way, man reaches upper knowledge by developing his will, in a strain of union with his inner Being, his true Being, where the consciousness of his own immortality lies.