The Symbolism of the Raven 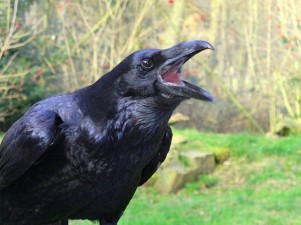 The black of its feathers and its mournful cry make the raven, which feeds on carrions, a bird of ill omen.

This reputation is also to be found in China even though the Chinese see the raven as symbol of filial gratitude, considering the fact that it feeds its parents.

In Japan as well the raven is taken as the expression of family affection. It is also regarded as a messenger of the gods, the herald of victories to come. Being a solar bird, it is represented as a red bird.

In old India, the Mahabharata takes it as the messenger of death.

In the Book of Genesis the raven is a symbol of clear-sightedness. Noah sent it out to see if the lowlands had emerged from the waters of the Flood.

In Ancient Greece, the raven is sacred to Apollo. Strabo says that ravens determined the site of the navel-stone (Omphalos) at Delphi. However, Pindarus states that the task was performed by eagles and Plutarch says it was by swans. The raven is among the attributes of Mithras.

For the Celts, the sacred bird plays a prophetic role. According to the Pseudo-Plutarch, the name of Lyons, Lugdunum, is to be translated as “Raven‚Äôs Hill” and not as “Lug‚Äôs Hill” because a flight of ravens showed the founders where to build the city.

The bird was sacred to the Gauls.

For North American Indians, the bird is the personification of thunder and wind; the same goes for the Mayas in the Popol-Vuh.

Its appearance in dreams is considered as an ill omen. It gloomily wheels over battlefields. It also represents solitude and voluntary isolation.

The symbolism of the raven is full of contradictions: solar and gloomy bird at the same time, it is a messenger of death and disgrace but it can also protect. This ambivalence of the symbol is due to its varied physical proprieties.