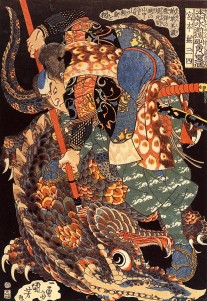 Miyamoto Musashi killing a giant creature, from The Book of Five Rings

“Chivalry is itself the poetry of life.”

Amidst the vibrant mythological tradition of Japan emerges an interesting story of creation that speaks of deities Izanami and Isanagi, who were instructed by the primordial gods to dip a spear into the celestial ocean. As they withdrew the spear, the drops that trickled off its blade, are said to have created the islands of Japan. Was this perhaps the beginning of what would later influence the famed warrior spirit of the Samurai in Japan?

It is necessary to first dispel the notion that the Samurai were simply brutal mercenaries, expert killing machines, patronized by power hungry feudal clans. Although such examples are abundantly documented through history, perhaps these were the declining remnants of a much deeper, spiritual way of life.

The existence of such a warrior class is not unique to Japan, and can be compared to Knights of ancient Europe or the Kshatriyas, the warriors of ancient India. While today we tend to look at warriors as mere fighting men, many ancient cultures considered the warrior spirit as inspiration for a spiritual state of consciousness. And so we find reference to glorious warriors throughout the ancient world; warriors who did their utmost to shield themselves from invasion of the disrupting forces of the ego, engaged in a constant inner battle. In Japan, a formal code of conduct emerged, and prescribed the principles to which each samurai must adhere, giving way to what we know of today as the Bu-shi-do, or the ‘Way of the Warrior’.

The Bu-shi-do code served as a book of instructions guiding the behavior in practice on and off the battlefield. Because it was a practical manual it offered the opportunity, to act coherently throughout one’s life, aligning actions to universal ideals, or virtues, thus ensuring that every action was decisive and meaningful. Zen elements like introspection of one’s own nature, also find resonance. Hence it meant living life on a foundation of principles and morality.

It is said that the essence of the Samurai way lay in the development of excellence in two aspects: Bun and Bu, or Culture and Martial, respectively. A Samurai was expected to develop a balance between both these ideals, resulting in efficient and disciplined warriors, who were also skilled in the arts, calligraphy, and poetry. The most accomplished Samurai are known to have been able to compose exquisite verse, whilst engaged in the very act of killing on a battlefield, demonstrating their inner non-violent composure and courtesy. An unknown eighteenth century scholar compared Bun and Bu to the wings of a bird:

“Culture and arms are like the two wings of a bird. Just as it is impossible to fly with one wing missing, if you have culture but no arms, people will slight you without fear, while if you have arms but no culture, people will be alienated by fear. Therefore, when you learn to practice both culture and arms, you demonstrate both intimidation and generosity, so people are friendly but also intimidated, and they will be obedient.” (Arts of the Samurai, 2009.)

Another anonymous source states, “Fighting isn’t all there is to the Art of War. The men who think that way, and are satisfied to have food to eat and a place to sleep, are mere vagabonds. A serious student is much more concerned with training his mind and disciplining his spirit than with developing martial skills.”

The Bu-shi-do tradition speaks of seven, or sometimes eight, virtues namely Justice, Courage, Generosity, Truthfulness, Courtesy, Mercy, Loyalty. These virtues are said to be the inherent, but usually latent, qualities of a human being, of the spirit, and therefore when these qualities are manifested, it is said that it gives expression to the natural aspect of who we truly are – a spiritual being, enveloped by a tangible body, an energetic body, an emotional body, as well as a mental body.

However like all tools, these virtues are meant to be used and therefore the primary responsibility of the samurai was to practice, defend and uphold these values at all times. Each virtue was intertwined with another, like links of a chain that complete the circle of the Bu-shi-do code. For instance the Samurai found it worthless to act with courage, if not in the pursuit of justice. Likewise, it was impossible to express generosity in the absence of mercy. For the Samurai, every act had to be an honourable act, and every battle was therefore, an honorable battle – both externally, and internally.

But what is this battle? Who is fighting whom? In resonance with the external battles between the medieval warlords, perhaps the battle that concerns us, is the battle we are fighting in our day-to-day life. Every day we are faced with choices that cause an inner conflict between our lower ego and our higher virtues. This opposition is beautifully expressed in mythologies worldwide: the battle fought by Arjun overcoming the Kauravas in the battle of the Kurukshetra, the slaying of the dragon by St. George, or Theseus killing the Minotaur. Each of these mythologies signifies the glorious hero overcoming the dangerous hidden monsters of the personality in the deep dark abyss of the self. It is in that dark place that vices such as anger, greed, jealously, fear, weakness, insecurity, like the infinite Kauravas, lie in hiding. And the task of the hero is not just to fight, but to slay each dragon, lest from the dead it should arise again. The Hero, however, needs the right weapons to fight these monsters, which are the virtues which enable him to emerge victorious. When we emulate this victory in our own life, we tame our personality, and express our true identity.

Samurais can best be described as “Philosophers in Action” for whom life was a process through which to discover the true Self, awaken that Self, and transform into that Self. Eternal and perfect, this Self temporarily takes on material form, in order to engage in this battle, to eventually emerge victorious, and free of the lower calls of the transient personality. Actions in the material realm then, are manifestations of an inner state of being, and therefore every action must be treated ceremoniously, requiring attention, discipline, and alignment; for the Samurai, even in the face of death.

When Plato exclaimed, “Man you are God, but you’ve forgotten,” perhaps he insists that the very purpose of human life is to remember – to recognize these inner qualities, and express them here, and now. Krishna teaches in the Bhagawad Gita, “the real Kurukshetra is here in our own lifetime”. Yes, the way of the warrior is difficult. It needs patience, perseverance, and courage. But it is only by beginning the journey that one arrives at the destination.

Usually, we choose the easy over the difficult, the comfortable over the adventurous; we choose survival over truly living. But in order to live we need these values to help us realise our true self and move out of the darkness of ignorance, into the light, into a happier, more fulfilled, life. These values are in a sense the divine GPS system which allow us to attain our highest goal. It is only by listening to the call of the whispering inner voice, yearning to start living these virtues, that truly one becomes a modern-day warrior, a modern-day Samurai.