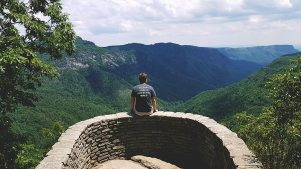 Does my mind exist outside of me? Who am I really, if not my mind? Many of us have experienced the predicament of almost having a face-off within ourselves, as if there were two people debating within us; one of whom we eventually align with. Sometimes, we’re even surprised to find that our mind seems to have a mind of its own! “I don’t know what came over me,” we say puzzled, “how could I have behaved so out of character?” It is not the way that we would have chosen to behave in our better moments. And perhaps therein lies a clue: our better moments…when we would have acted from a higher self. It feels unlike us because in actuality, our mind is not really who we are. It is a tool that we have, but it is not us.

So who then, are we really? What could be beyond our thoughts, our feelings, and our body? Many traditions speak of a soul, an incorporeal non-material essence that animates the body and gives it life. It is believed that this part, which is neither physical nor tangible, continues to exist even after the body has died. This part of us – as many of us believe is the most significant part – is eternal and infinite, not temporary and limited like the body.

In response to the question, “Do you have a soul?” philosophers in ancient times would say, “No – I am the soul; what I have, is a body.” A soul…the word itself stirs something higher within us. It makes us want to grasp this indefinable something that is so pure and subtle that it’s hard to put into words and define by language. So we wonder: what is this higher self that most traditions speak of as the classic antithesis to matter, called spirit.

Greek philosophers separate what most of us call the mind from the spirit, naming our psychological world of thoughts and feelings as Psyche and our higher self, or spirit, as Nous. They clearly differentiate between the motives and the manifestations of each. They say that our Psyche functions like a mirror and can reflect either our base self, filled with animalistic impulses of ‘me’ above all – and the bundle of emotions that come along with it, fuelled by the ego…or it can reflect our larger, altruistic, human self that recognizes itself as part of humanity, of a larger ‘we’ and feels one with all life driven by a harmony-seeking spirit.

Similar to this differentiation is the description in Indian philosophy that puts forth the concept of two levels of mind: Manas, the objective, discerning mind of reason belonging to our higher self…and Kama Manas, the subjective mind under the influence of Kama, or personal desire. Clouded with it in fact, and rendered a slave to its bidding. This aspect of the mind belongs to the lower self and is not in reality us; it is only a vehicle, a tool meant to be used to help us think, organize, and calculate. But it seems to fall to autopilot at times, or worse, like a runaway train that we just don’t seem to have the power to stop even when we know it’s heading for trouble. Like that fit of anger which we know is going to strain the relationship further, and instead of mending, has exactly the opposite effect of what we truly intended. Or that surge of selfishness that makes us do something we regret – but we end up doing it anyway. Or even simply postponing things repeatedly, because they seem too tiresome to do – until they spiral out of control and we’re caught up in the aftermath of the storm that needn’t have been. So we stand by helplessly and watch ourselves fall into the same traps again and again, as we ignore the Manas and allow the Kama Manas to take charge. And true to its nature, laden with desires, it drags us down. This is when we feel that our mind is our enemy.

Apart from over-thinking, which gets us into all sorts of trouble, a false sense of calm is also a common pitfall. “An idle mind is the devil’s workshop,” they say. If the Kama Manas is not channelized towards something productive and positive, it will veer towards mischievous thoughts. So we have to keep it on the right track. The Buddha called it the ‘monkey-mind’; something that we need to tame and train for it to be productive at the level of its immense potential, which it rarely exhibits. The lesser mind is an illusionist – a master craftsman in the art of manipulation when left unsteered, rather than imaginative and inspiring. Because it is the same entity that has the power to produce Homer’s Iliad as well as Hitler’s holocaust.

If the mind has such immense power, do we all have the potential to produce Shakespeare’s verses or Spielberg’s films? What about the talent to compose Mozart’s melodies and create Michelangelo’s masterpieces? We might wonder whether that muse of creativity resides in us all or if it is a blessing bestowed upon just a chosen few. While I believe everyone has this potential, perhaps we would be unable to grasp the concept of gravity by ourselves for instance, if Newton had not first realized and explained it to us. So what can we do, to make that leap and bridge the chasm from limited knowledge into that vast and infinite mindscape that the great people around the world have exhibited across various streams?

What could help are the three ‘I’s: Imagination, Inspiration and Intuition.

To begin with, we could exercise our imagination, an ability that is different from fantasy in that it is not just wishful thinking, but thoughtful wishing. It flexes our ability to envision a scenario that doesn’t exist yet, but which we can see taking shape in our mind’s eye. It could be an innovation that progresses our understanding of the world, like the telescope which enables us to see countless constellations, or a design that reduces our time and effort – like an airplane or a mobile phone. And yet, while these inventions are a great help, we can’t say that they are good in themselves; it depends on how we use them. We need to use these efficient tools to free up time in order to think about things beyond our own comforts and to take a look at the need of the world around us. It’s the same with the mind. By itself, it is one of our greatest treasures; it analyzes and calculates. But most importantly, it can imagine.

With humility we might realize that none of our ideas are truly original. The originals already exist as archetypes and we only channelize the glimpse that we have of them…the small part that we have recognized and understood and are therefore able to share, with some added spice of our own expression of it. But the idea already exists and always has.

Therefore, it also takes inspiration to lift our minds towards the higher… towards Manas, our innate ability to think objectively and see the big picture. Something needs to move our spirit and lift our gaze beyond the material confines of daily life…to inspire us to really look at the infinity of the cosmos around us and grasp our role within it; to enable us to see the limitations of our earthly forms, while learning to recognize the priceless opportunities to grow beyond. To see ourselves not as 5-foot-something bodies but as unlimited minds that put a man on the Moon and Mangalyaan on Mars. To remember the might of a Mahatma Gandhi, a Martin Luther King, a Nelson Mandela and the 12-year-young Malala – all of whom won a resounding victory against injustice without firing a single shot, or a volley of hurtful words even, but by the strength of their spirit.

If we can reach out to and connect with our Manas, this other dimension within ourselves, we could make our mind our strongest ally. We could both be on the same side instead of one half having to constantly tame and subdue the other. We would see that it’s only the ego wearing an intellectual mask, parading around as the master, and choose to hand over the reins to the charioteer instead of allowing the horses to pull us to different directions. And the compass to enable us to do this is ethics – that inner moral code that helps us make the right, just and noble choice, time after time.

Delia Steinberg Guzman, the Honorary President of International Organisation New Acropolis says, “It doesn’t matter that it’s not fashionable to be good, honest, just, prudent, courteous, brave, generous and dignified; the truth is that, without these and other similar characteristics, there will be no quality of life. And the facts demonstrate this. In the spiritual aspect, without falling into fanatical and intransigent formulas, some answers have to be offered to the questions of the soul, which wants to know what we are doing here in the world, where we come from and where we are going…It’s true, we all want quality of life. But we want to give life its real and broad meaning and make sure that this quality improves us in all aspects. Then we will be more efficient, happier, more intelligent, a little wiser, and we will be able to wear the badge of human beings with pride.” (1)

This is the great battle, the Mahabharata that Arjuna fought, ostensibly defending a kingdom against cousins-turned-enemies, but symbolically representing an inner battle between our virtues and the myriad desires that threaten to obscure them.

And so, in the effort to un-hinder our minds and allow us to take the great leap towards brilliance, the third quality that we need to develop is intuition. A kind of effortless knowing of what the right thing to do is, because it draws on deep roots of wisdom within ourselves. Dictionary.com defines it thus: “Intuition is a process that gives us the ability to know something directly without analytic reasoning, bridging the gap between the conscious and nonconscious parts of our mind, and also between instinct and reason.” (2)

And what intuition can really help us to do is connect our mind with our heart. Because somewhere between them is that indefinable thing called the conscience. And it always guides us or prods us into doing the right thing…into making an ethical choice.

What could help us is to connect with Manas because that is the start of expressing our human potential – freedom from a mind clouded with desire to one that sees the harmony and wants to be a part of it. And it is our duty, as well as our privilege, to live this opportunity fully. It is also the way to make our world a better place, with each one of us bringing forth the best of ourselves and creating a ripple effect around us until drop by drop, it becomes a better ocean…and person by person, we become a better humanity.